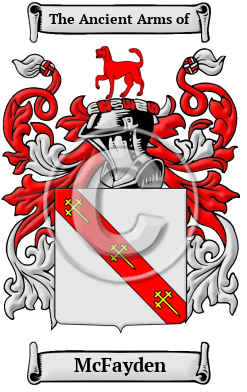 The Clan from whom the McFayden family descends began among the ancient Dalriadan kingdom of the west coast of Scotland. Their name comes from the personal name Paidean. The Gaelic forms of the surname are Mac Phadein or Mac Phaidin, both of which mean son of Paidean.

Early Origins of the McFayden family

The surname McFayden was first found in Kintyre, where they held a family seat from very ancient times, some say well before the Norman Conquest and the arrival of Duke William at Hastings in 1066 A.D.

Early History of the McFayden family

This web page shows only a small excerpt of our McFayden research. Another 109 words (8 lines of text) are included under the topic Early McFayden History in all our PDF Extended History products and printed products wherever possible.

Historical recordings of the name McFayden include many spelling variations. They are the result of repeated translations of the name from Gaelic to English and inconsistencies in spelling rules. They include McFadyen, Fadden, Fadyen, Faden, McFadin, Fadin, McFadwyn, Fadwyn, McFadyean, McFadyon, McFayden, Feyden and many more.

More information is included under the topic Early McFayden Notables in all our PDF Extended History products and printed products wherever possible.

Migration of the McFayden family to Ireland

Some of the McFayden family moved to Ireland, but this topic is not covered in this excerpt.
Another 75 words (5 lines of text) about their life in Ireland is included in all our PDF Extended History products and printed products wherever possible.

Migration of the McFayden family

Significant portions of the populations of both the United States and Canada are still made up of the ancestors of Dalriadan families. Some of those in Canada originally settled the United States, but went north as United Empire Loyalists in the American War of Independence. The late 19th and early 20th centuries saw the ancestors of many Scots on both sides of the border begin to recover their collective national heritage through Clan societies and highland games. Some of the first North American settlers carried this name or one of its variants: Alexander, Andrew, Bernard, Catherine, Charles, Cornelius, Daniel, Dennis, Douglas, Edward, Fergus, Francis, George, Hugh, James, John, Michael, Patrick, Robert, Samuel, Thomas, William McFadden, who all arrived in Philadelphia between 1840 and 1865. Andrew, Edward, James, Thomas McFaden settled in New Hampshire in 1718.

Historic Events for the McFayden family +