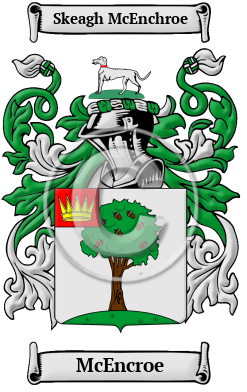 The original Irish Gaelic form of this name is "Mac Conchruabha," where the "ruabha" is most likely a place name, but the name has been Anglicized into many different forms.

Early Origins of the McEncroe family

The surname McEncroe was first found in Thomond (Irish: Tuadh Mumhan), literally North Thomond, the pre-Norman Kingdom of Thomond, since divided between counties Limerick, Tipperary and Clare, where they held a family seat as Chiefs of their sept. The name is most popular in the counties of Cavan and Leitrim.

Early History of the McEncroe family

This web page shows only a small excerpt of our McEncroe research. Another 92 words (7 lines of text) are included under the topic Early McEncroe History in all our PDF Extended History products and printed products wherever possible.

More information is included under the topic Early McEncroe Notables in all our PDF Extended History products and printed products wherever possible.

McEncroe migration to the United States +

McEncroe Settlers in United States in the 19th Century