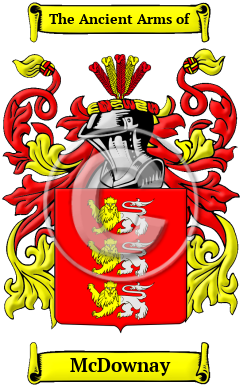 The forbears of the name McDownay are thought to be of the ancient Scottish kingdom of Dalriada. The name indicates that the first bearer lived in the old barony of Duny or Downy, which was also called Douney in 1331, in the parish of Monikie, Angus. The surname is still commonplace in the district and Downie is one of the oldest names in the parish of Kemnay. [1]

Early Origins of the McDownay family

The surname McDownay was first found in the parish of Monikie in Angus (Gaelic: Aonghas), part of the Tayside region of northeastern Scotland, and present day Council Area of Angus, formerly known as Forfar or Forfarshire.

Early History of the McDownay family

Medieval spelling was at best an intuitive process, and translation between Gaelic and English was no more effective. These factors caused an enormous number of spelling variations in Dalriadan names. In fact, it was not uncommon to see a father and son who spelled their name differently. Over the years, McDownay has been spelled Downey, Downie, Downy, MacIldowney, MacIldownie, MacDowney, MacDownie, O'Downey and many more.

Notable amongst the Clan from early times was William Dauney, " son of William Dauney of Falmouth, Jamaica, was born at Aberdeen in the year 1800. He commenced his education at Dulwich, and completed it at the University of Edinburgh. On June 13, 1823, he was called to the Scottish bar. He found in the Advocates' Library at Edinburgh a MS. collection of music, written between 1614 and 1620 and known as the Skene Manuscript. It consists of 114 English and Scottish ballad, song, and dance tunes, written in tableture. This manuscript Dauney deciphered and published...
Another 95 words (7 lines of text) are included under the topic Early McDownay Notables in all our PDF Extended History products and printed products wherever possible.

Migration of the McDownay family to Ireland

Some of the McDownay family moved to Ireland, but this topic is not covered in this excerpt.
Another 95 words (7 lines of text) about their life in Ireland is included in all our PDF Extended History products and printed products wherever possible.

Migration of the McDownay family

Many settled along the east coast of what would become the United States and Canada. As the American War of Independence broke out, those who remained loyal to the crown went north to Canada as United Empire Loyalists. The ancestors of all of these hardy Dalriadan-Scottish settlers began to recover their collective history in the 20th century with the advent of the vibrant culture fostered by highland games and Clan societies in North America. Highland games, clan societies, and other organizations generated much renewed interest in Scottish heritage in the 20th century. The McDownay were among the earliest of the Scottish settlers as immigration passenger lists have shown: John Downie who settled in New England in 1685; Daniel Downey settled in New England in 1748; Andrew, James, John, Mary, Michael, Patrick, Peter, Terence, Timothy, and William Downey, who arrived in Philadelphia between 1840 and 1865..