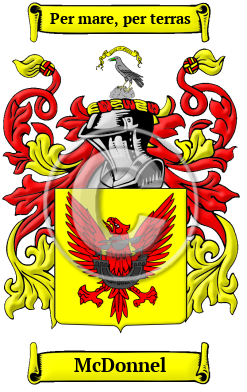 The age-old Hebrides islands and the west coast of Scotland are the ancestral home of the McDonnel family. Their name comes from the personal name Donald. the surname is derived from the Gaelic Mac Dhomhnuill, which means son of Donald; it is a form of the surname MacDonald.

Early Origins of the McDonnel family

The surname McDonnel was first found in Inverness, where the origins of this name can be traced back to Somerled, Regulus of the Isles, who evicted the Norsemen from the Western Isles during the 12th century. From him is descended John Macdonald, first Lord of the Isles, and it was MacDonald's younger son, Ranald, who was the progenitor of Clanrald, which includes the families of Moidart, Morar, Knoidart and Glengarry. The MacDonells are from this last branch. It is from Ranald's son, Donald, that the MacDonell's take their name (Son of Donald). There is also a branch of the MacDonells that claim Ranald's other son, Alistair, as its progenitor (the Keppoch branch).

Early History of the McDonnel family

Medieval spelling was at best an intuitive process, and translation between Gaelic and English was no more effective. These factors caused an enormous number of spelling variations in Dalriadan names. In fact, it was not uncommon to see a father and son who spelled their name differently. Over the years, McDonnel has been spelled MacDonnell, MacDonnel, McDonnell, MacDonell and others.

More information is included under the topic Early McDonnel Notables in all our PDF Extended History products and printed products wherever possible.

Migration of the McDonnel family to Ireland

Some of the McDonnel family moved to Ireland, but this topic is not covered in this excerpt.
Another 118 words (8 lines of text) about their life in Ireland is included in all our PDF Extended History products and printed products wherever possible.

McDonnel migration to the United States +

Scottish settlers arrived in many of the communities that became the backbones of the United States and Canada. Many stayed, but some headed west for the endless open country of the prairies. In the American War of Independence, many Scots who remained loyal to England re-settled in Canada as United Empire Loyalists. Scots across North America were able to recover much of their lost heritage in the 20th century as Clan societies and highland games sprang up across North America. Early immigration and passenger lists have documented some of the first McDonnels to arrive on North American shores:

McDonnel Settlers in United States in the 17th Century

McDonnel Settlers in United States in the 18th Century

McDonnel Settlers in United States in the 19th Century

McDonnel Settlers in United States in the 20th Century

McDonnel Settlers in Australia in the 19th Century

McDonnel Settlers in New Zealand in the 19th Century