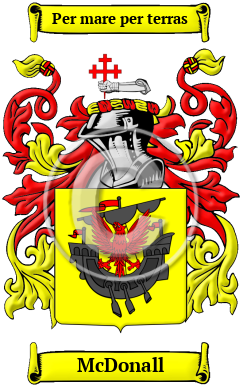 The McDonall family history stretches back to the clans of the Dalriadan kingdom on the sea-swept Hebrides islands and mountainous western coast of Scotland. The name McDonall is derived from the Anglicized version of the Gaelic personal name Mac Dhomhnuill. McDonall is a patronymic surname, which belongs to the category of hereditary surnames. The surname McDonall arose from the vernacular naming tradition, whereby surnames were formed by adopting the given name of one's father, or another ancestor. This name was first found in Kintyre, where members of this family had resided for many years.

Early Origins of the McDonall family

The surname McDonall was first found in Kintyre, and much of the Eastern islands and coast-lands where members of this Clan, descended through Somerled, Lord of the Isles and had resided for many years.

Early History of the McDonall family

Medieval translation of Gaelic names could not be referred to as an accurate process. Spelling was not yet standardized, and names in documents from that era are riddled with spelling variations. McDonall has been written as MacDonald, Macdonald, McDonald, Donaldson, MacDonny and many more.

Notable amongst the Clan from early times was John of Islay, or John MacDonald, (d. 1386), the first Lord of the Isles (1336-1386) and chief of Clan Donald. He was he was the son of Angus Og Macdonald, who died at Isla about 1329, and was buried at Icolmkill. The Macdonalds trace their descent from Donald, elder son of Refinald, second son of Sommerled of Argyll, king of the Isles. On account of a dispute with the regent regarding certain lands, John of Isla joined the party of Edward Baliol, to whom, in consideration of a grant of the lands of...
Another 354 words (25 lines of text) are included under the topic Early McDonall Notables in all our PDF Extended History products and printed products wherever possible.

Migration of the McDonall family to Ireland

Some of the McDonall family moved to Ireland, but this topic is not covered in this excerpt.
Another 66 words (5 lines of text) about their life in Ireland is included in all our PDF Extended History products and printed products wherever possible.

McDonall migration to the United States +

The descendants of the Dalriadan families who made the great crossing of the Atlantic still dot communities along the east coast of the United States and Canada. In the American War of Independence, many of the settlers traveled north to Canada as United Empire Loyalists. Clan societies and highland games have allowed Canadian and American families of Scottish descent to recover much of their lost heritage. Investigation of the origins of family names on the North American continent has revealed that early immigrants bearing the name McDonall or a variant listed above include:

McDonall Settlers in United States in the 18th Century

McDonall Settlers in United States in the 19th Century

McDonall Settlers in Canada in the 18th Century