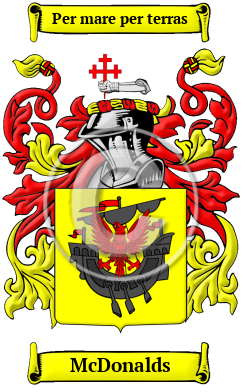 The old Scottish-Dalriadan name McDonalds is derived from the Anglicized version of the Gaelic personal name Mac Dhomhnuill. McDonalds is a patronymic surname, which belongs to the category of hereditary surnames. The surname McDonalds arose from the vernacular naming tradition, whereby surnames were formed by adopting the given name of one's father, or another ancestor. This name was first found in Kintyre, where members of this family had resided for many years.

Early Origins of the McDonalds family

The surname McDonalds was first found in Kintyre, and much of the Eastern islands and coast-lands where members of this Clan, descended through Somerled, Lord of the Isles and had resided for many years.

Early History of the McDonalds family

Translation in medieval times was an undeveloped science and was often carried out without due care. For this reason, many early Scottish names appeared radically altered when written in English. The spelling variations of McDonalds include MacDonald, Macdonald, McDonald, Donaldson, MacDonny and many more.

Notable amongst the Clan from early times was John of Islay, or John MacDonald, (d. 1386), the first Lord of the Isles (1336-1386) and chief of Clan Donald. He was he was the son of Angus Og Macdonald, who died at Isla about 1329, and was buried at Icolmkill. The Macdonalds trace their descent from Donald, elder son of Refinald, second son of Sommerled of Argyll, king of the Isles. On account of a dispute with the regent regarding certain lands, John of Isla joined the party of Edward Baliol, to whom, in consideration of a grant of the lands of...
Another 354 words (25 lines of text) are included under the topic Early McDonalds Notables in all our PDF Extended History products and printed products wherever possible.

Migration of the McDonalds family to Ireland

Some of the McDonalds family moved to Ireland, but this topic is not covered in this excerpt.
Another 66 words (5 lines of text) about their life in Ireland is included in all our PDF Extended History products and printed products wherever possible.

Migration of the McDonalds family

These settlers arrived in North America at a time when the east was burgeoning with prosperous colonies and the expanses of the west were just being opened up. The American War of Independence was also imminent. Some Scots stayed to fight for a new country, while others who remained loyal went north as United Empire Loyalists. The ancestors of all of them went on to rediscover their heritage in the 20th century through highland games and other patriotic Scottish events. The McDonalds were among these contributors, for they have been located in early North American records: Daniel Macdonald, who came to New Jersey sometime between 1730 and 1749; Angus McDonald who settled in Virginia in 1746; Norman and Elizabeth Macdonald, and their two children who settled in Georgia in 1741.