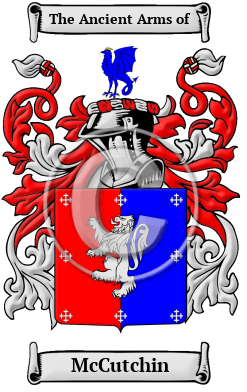 The name McCutchin was first used by Viking settlers in ancient Scotland. It was derived from Huchon, a diminutive form of Hugh. [1] Patronymic surnames arose out of the vernacular and religious given name traditions. This name is the equivalent of Hugh in the vernacular of Scotland. The suffix 'son' indicates "son of."

Early Origins of the McCutchin family

The surname McCutchin was first found in Northumberland. The family originated at Castle Cronenberg in Norway about 900 A.D. Hutchin, a Viking noble accompanied Harold Harfager, who settled on the north east coast at Bishop Middleham in Northumberland. Later, some of the family were found in Yorkshire as the Yorkshire Poll Tax Rolls of 1379 list: Mathew Huchonson; Isota Huchonson; Willelmus Hugehonson; and Mathew Huchonson. [2]

Early History of the McCutchin family

Notable amongst the Clan from early times was William Hutchinson (1586-1642), born in Lincolnshire who arrived in Boston aboard the Griffin in 1634 became a prominent merchant and judge in the Massachusetts Bay Colony and one of the founders of Rhode Island. Sir Thomas Hutchinson (1587-1643), was an English Member of Parliament for Nottinghamshire. Colonel John Hutchinson (1615-1664), was an English Puritan leader and politician who signed the death warrant of King Charles I, but was not executed, but in 1663 he was accused of involvement in the Derwentdale Plot and sent to prison where he eventually died. Anne Hutchinson (1591-1643), was one of...
Another 102 words (7 lines of text) are included under the topic Early McCutchin Notables in all our PDF Extended History products and printed products wherever possible.

Migration of the McCutchin family to Ireland

Some of the McCutchin family moved to Ireland, but this topic is not covered in this excerpt.
Another 102 words (7 lines of text) about their life in Ireland is included in all our PDF Extended History products and printed products wherever possible.

McCutchin migration to the United States +

McCutchin Settlers in United States in the 19th Century