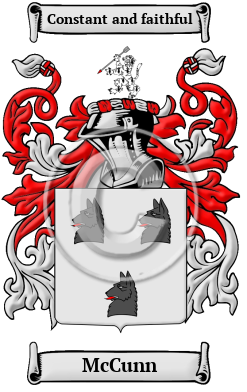 McCunn is a very old Scottish name that may even date back to the Dalriadan tribe of Scotland's western coast and Hebrides islands. It comes from Suibhne, an old Gaelic forename which probably means good-going or well-going. The Gaelic form of the surname is Mac Shuibhne.

Early Origins of the McCunn family

The surname McCunn was first found in on the Isles of Skye and Lewis (Scottish Gaelic: Leòdhas), where they were originally a branch of the MacDonalds of Clanranald. But although the MacQueens held lands of Garafad on the Isle of Skye for several centuries it is likely that the first MacQueen was the Lord of Knapdale in Argyllshire who held Castle Sween.

Early History of the McCunn family

This web page shows only a small excerpt of our McCunn research. Another 136 words (10 lines of text) covering the years 1411 and 1743 are included under the topic Early McCunn History in all our PDF Extended History products and printed products wherever possible.

Spelling variations are a very common occurrence in records of early Scottish names. They result from the repeated and inaccurate translations that many names went through in the course of various English occupations of Scotland. McCunn has been spelled MacQueen, MacQueon, MacSween, MacSwene, MacSweyne, MacSwan, MacCunn and many more.

Notable amongst the Clan from early times was MacQueen of Pall à Chrocain, a legendary Highland deer stalker popularly believed to have slain the last wolf Tarnaway Forest in the province of Morayshire in 1743. Apparently, he received a message from his chief, the Laird of Clan Mackintosh, that a black wolf had killed two children. He arrived late for the meeting, received a tirade from his chief only to reveal from under his garment the head of the wolf. He described the event as...
Another 84 words (6 lines of text) are included under the topic Early McCunn Notables in all our PDF Extended History products and printed products wherever possible.

Migration of the McCunn family to Ireland

Some of the McCunn family moved to Ireland, but this topic is not covered in this excerpt.
Another 48 words (3 lines of text) about their life in Ireland is included in all our PDF Extended History products and printed products wherever possible.

McCunn migration to the United States +

Numerous Scottish settlers settled along the east coast of the colonies that would become the United States and Canada. Others traveled to the open country of the west. At the time of the American War of Independence, some remained in the United States, while those who remained loyal to the crown went north to Canada as United Empire Loyalists. The highland games and Clan societies that sprang up across North America in the 20th century have helped many Scots to recover parts of their lost traditions. Research into passenger and immigration lists has revealed some of the very first McCunns to arrive in North America:

McCunn Settlers in United States in the 19th Century