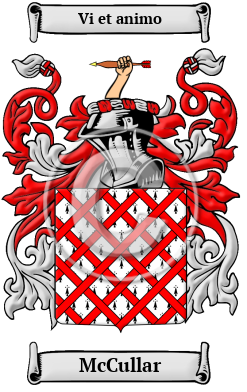 The Strathclyde clans of the Scottish/English Borderlands were the first people to use the name McCullar. It is derived from the Gaelic personal name Cullach, meaning boar.

Early Origins of the McCullar family

The surname McCullar was first found in Wigtownshire (Gaelic: Siorrachd Bhaile na h-Uige), formerly a county in southwestern Scotland, now part of the Council Area of Dumfries and Galloway where one of the first on record was Andrew MacCulloch who served King William the Lion of Scotland and received the lands of Myretoun (now Monreith near Whitehorn in Wigtown). However ancient records show the Clan as being mentioned in the year 743 in that area.

Early History of the McCullar family

This web page shows only a small excerpt of our McCullar research. Another 76 words (5 lines of text) covering the years 1296, 1354, 1640, 1697, 1470 and are included under the topic Early McCullar History in all our PDF Extended History products and printed products wherever possible.

It is only in the last few hundred years that rules have developed and the process of spelling according to sound has been abandoned. Scottish names from before that time tend to appear under many different spelling variations. McCullar has been spelled MacCulloch, MacCullagh, MacCully, MacCullough, MacCulley, MacCullaugh, MacCullock, MacCullie, MacLulich and many more.

Notable amongst the family at this time was Sir Godfrey McCulloch, 2nd Baronet of Mertoun (c.1640-1697), a Scottish politician executed for the murder of William Gordon who died from a shot in the leg, partly as a result of a long-standing feud. Following the execution, much of his family emigrated to America...
Another 52 words (4 lines of text) are included under the topic Early McCullar Notables in all our PDF Extended History products and printed products wherever possible.

In the United States, the name McCullar is the 10,455th most popular surname with an estimated 2,487 people with that name. [1]

Migration of the McCullar family to Ireland

Some of the McCullar family moved to Ireland, but this topic is not covered in this excerpt.
Another 60 words (4 lines of text) about their life in Ireland is included in all our PDF Extended History products and printed products wherever possible.

McCullar migration to the United States +

Unwelcome in their beloved homeland, many Scots sailed for the colonies of North America. There, they found land and freedom, and even the opportunity to make a new nation in the American War of Independence. These Scottish settlers played essential roles in the founding of the United States, and the shaping of contemporary North America. Among them:

McCullar Settlers in United States in the 20th Century