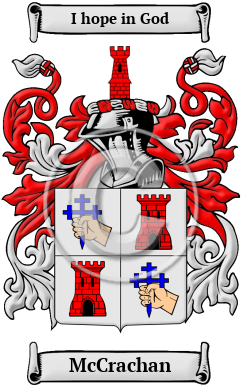 Early Origins of the McCrachan family

The surname McCrachan was first found in Wigtown (Gaelic: Siorrachd Bhaile na h-Uige), formerly a county in southwestern Scotland, now part of the Council Area of Dumfries and Galloway.

However, there is much dispute to the origin of the family. "Various explanations have been given of the origin of this name, the most likely of which is that it is "nothing but a variant owing to the action of two well-known dialectal processes of the name Macnauchton." Settlements from Argyll into Galloway were made about the middle of the eighth century and later, and Watson has pointed out that with regard to dedications in Galloway that there was a close connection between this region and Kintyre." [1]

Spellings were very varied as we found: "Michael Makcraken was a follower of the earl of Cassilis respited for murder, 1526. Gilbert M'Crekane was burgess of Wigtown, and Michael M'Crekane notary public there, 1536, and burgess, 1546. John M'Crekane was vicar of Sorbie, 1536, notary public in Wigtown, 1539, and commissary of Fames and Rennys, 1542-1545." [1]

Early History of the McCrachan family

Notable amongst the family at this time was Henry Joy McCracken (1767-1798), "United Irishman, was born in Belfast on 31 Aug. 1767, and brought up to the linen business. At the age of twenty-two he was placed at the head of a cotton factory. Adopting nationalist sentiments, he in 1791 joined with Thomas Russell in the formation of the first society of United Irishmen in Belfast, and gave himself enthusiastically to the working of designs. In October 1796 he was along with his brother William, and imprisoned in Kilmainham gaol for thirteen months. Ultimately he was liberated on bail, and returning...
Another 154 words (11 lines of text) are included under the topic Early McCrachan Notables in all our PDF Extended History products and printed products wherever possible.

Migration of the McCrachan family to Ireland

Some of the McCrachan family moved to Ireland, but this topic is not covered in this excerpt.
Another 100 words (7 lines of text) about their life in Ireland is included in all our PDF Extended History products and printed products wherever possible.

McCrachan migration to the United States +

McCrachan Settlers in United States in the 19th Century