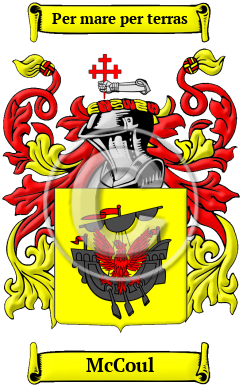 The age-old Hebrides islands and the west coast of Scotland are the ancestral home of the McCoul family. Their name comes from the personal name Somhairle, also known as Somerled. The Gaelic form of the name, Mac Somhairle, translates as son of Somhairle or son of Somerled.

Early Origins of the McCoul family

The surname McCoul was first found in Argyllshire where the Gaelic MacSomhairle 'son of Somhairle, ' or Somerled, Alexander M'Sommarrli was cited in 1355 to give evidence regarding the lands of Glassrie. "He was probably a Lamont of Monydrain in Glassrie as some of this family used the name Macsorley for several generations, but eventually resumed the name Lamont. The lands of Donald Machorle in the sheriffdom of Argyll were in ward, 1488. Other spellings of this Donald's name are McChorle, 1449, and McCowirlee, 1451. In 1511 Angus Lawmont alias M'Quorle was infeft in the three merk lands of Achynchoys. " [1]

"The MacSoirles of Letterfinlay in Lochaber, later called a sept of Clan Cameron, descended from Somerled, armiger to John of Yla, earl of Ross and lord of the Isles. In 1456 Somerled, the son of John, son of Somerled the armiger, received from the lord of the Isles a davoch of the lands of Glennyves along with the office of toscheachdeora (crowner) of all the lands of John of Yla, except the lands pertaining to his foster-child, Lachlan Maclean of Doward. Some writers on Clan history make the Macsorleys a sept of Clan Cameron, but this Somerled had received his charter thirty six years before the Camerons of Lochiel are known to have had any connection with the district." [1]

Early History of the McCoul family

Medieval spelling was at best an intuitive process, and translation between Gaelic and English was no more effective. These factors caused an enormous number of spelling variations in Dalriadan names. In fact, it was not uncommon to see a father and son who spelled their name differently. Over the years, McCoul has been spelled MacSorley, MacSorely, MacSourly, MacCoullie, MacSorrill, MacSorrell, MacSurley and many more.

More information is included under the topic Early McCoul Notables in all our PDF Extended History products and printed products wherever possible.

Migration of the McCoul family to Ireland

Some of the McCoul family moved to Ireland, but this topic is not covered in this excerpt.
Another 270 words (19 lines of text) about their life in Ireland is included in all our PDF Extended History products and printed products wherever possible.

McCoul Settlers in Australia in the 19th Century