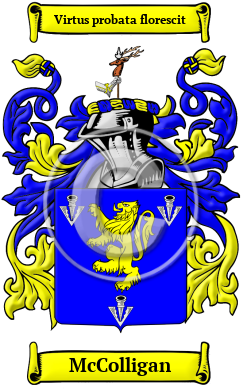 While the Anglicized versions of Irish names are familiar to most people, all Irish names have a long and proud Gaelic heritage that is often unknown. The original Gaelic form of the name McColligan is "O Cuileagain."

Early Origins of the McColligan family

The surname McColligan was first found in County Londonderry (Irish: Doire), a Northern Irish county also known as Derry, in the province of Ulster, where they held a family seat from ancient times.

Early History of the McColligan family

This web page shows only a small excerpt of our McColligan research. Another 112 words (8 lines of text) are included under the topic Early McColligan History in all our PDF Extended History products and printed products wherever possible.

The search for the origins of the name McColligan family name revealed numerous spelling variations. These variants can be somewhat accounted for when it is realized that before widespread literacy people only recognized their name by pronunciation; it was up to scribes to decide how it was to be formally recorded. Variations found include Culligan, Colligan, Quilligan, O'Quilligan, O'Culligan, O'Colligan, Coligan, Culigan, Colgan and many more.

More information is included under the topic Early McColligan Notables in all our PDF Extended History products and printed products wherever possible.

McColligan Settlers in Australia in the 19th Century