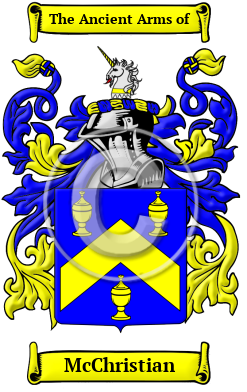 The west coast of Scotland and the rocky Hebrides islands are the ancient home of the McChristian family. The root of their name is the Latin given name Christianus, which means "belonging to Christ." Christianus was also the name of the 12th century Irish saint and Bishop of Candida Casa, and brother of St. Malachy of Armagh. Thus, the surname Christian became an extremely popular name, particularly in regions of Celtic or Irish influence such as Scotland, northern England, and the Isle of Man. It was also a common given name amongst the Danes and was the name of several Danish kings.

The name is "very common in some parts of Scotland. Sir Walter Scott tells a story of an unsuccessful gaberlunzie woman who in the bitterness of her disappointment exclaimed: "Are there no Christians here?" and was answered: "Christians! nae, we be a' Elliots and Armstrangs !" [1]

"Christianus was the name of a bishop of Candida Casa (Whithorn) who died at Holm Cultram in 1186." [2]

Early Origins of the McChristian family

The surname McChristian was first found in the north of England, "a familiar North-English font-name, though not wholly confined to the North." [3]

As one would expect the early rolls had mixed entries for the name as both a forename and surname. By example, the Hundredorum Rolls of 1273 listed: Jordan filius Cristine, Kent; Agnes filius Cristine, Cambridgeshire; Brice Cristian, Somerset; and Cristina Alayne, Buckinghamshire.

We would be remiss if we didn't mention the Christian family from the Isle of Man in more detail. On the infamous side, the mutineer Fletcher Christian was from this stock, but notably, the rear-admiral Sir Hugh CloBerry Christian (1747-1798), the Max writer Thomas Christian (d. 1799) and William Christian (1608-1663) the Receiver-General of the Isle of Man claimed the Isle of Man as their homeland.

Early History of the McChristian family

This web page shows only a small excerpt of our McChristian research. Another 87 words (6 lines of text) covering the years 1608, 1663, 1608, 1643 and are included under the topic Early McChristian History in all our PDF Extended History products and printed products wherever possible.

Notable amongst the Clan from early times was William Christian (1608-1663), receiver-general of the Isle of Man (famous in Manx history under the name of Illiam Dhône, 'Brown-haired William'), born on 14 April 1608. "He was the third son of Ewan Christian, one of the deemsters or judges of the Isle of Man and deputy-governor of Peel Castle. In 1643 his father made over to him the estate of Ronaldsway. The circumstances of this transaction throw some light on Christian's...
Another 79 words (6 lines of text) are included under the topic Early McChristian Notables in all our PDF Extended History products and printed products wherever possible.

In the United States, the name McChristian is the 13,007th most popular surname with an estimated 2,487 people with that name. [4]

Migration of the McChristian family to Ireland

Some of the McChristian family moved to Ireland, but this topic is not covered in this excerpt.
Another 50 words (4 lines of text) about their life in Ireland is included in all our PDF Extended History products and printed products wherever possible.

McChristian migration to the United States +

Numerous Scottish settlers settled along the east coast of the colonies that would become the United States and Canada. Others traveled to the open country of the west. At the time of the American War of Independence, some remained in the United States, while those who remained loyal to the crown went north to Canada as United Empire Loyalists. The highland games and Clan societies that sprang up across North America in the 20th century have helped many Scots to recover parts of their lost traditions. Research into passenger and immigration lists has revealed some of the very first McChristians to arrive in North America:

McChristian Settlers in United States in the 18th Century

McChristian Settlers in United States in the 19th Century