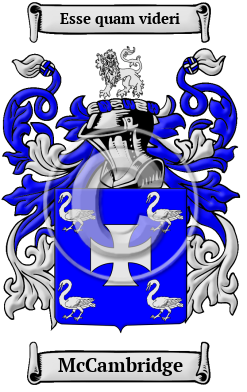 The origins of the McCambridge name lie with England's ancient Anglo-Saxon culture. It comes from when the family lived beside a bridge over the river Cam. This surname originated as a local name for natives who came from the town of Cambridge. Cambridge was in both Gloucestershire and Cambridgeshire.

Early Origins of the McCambridge family

The surname McCambridge was first found in Cambridge, a university, borough, and markettown in Cambridgeshire.

"This ancient town was the Grantan-brycge, Grantabricge, or Grante-brige, of the Saxon Chronicle, signifying "the Bridge over the Granta," the ancient name of the river Cam: by the substitution of cognate letters, the Saxon compound was altered after the Norman Conquest to Cantebrige, since contracted into Cambridge. The earliest authenticated fact in its history is its conflagration, in 871, by the Danes, who established on its desolated site one of their principal stations, which they occasionally occupied until the year 901. " [1]

John de Cambridge or Cantebrig (d. 1335), was an early English "judge, was of a Cambridge family, whence he took his name, and is said to have been son to Thomas Cantebrig, a judge of the exchequer under Edward II. He was M.P. for Cambridgeshire in 1321 and subsequent years, and earlier was in several judicial commissions for the county. In the last years of Edward II and early years of Edward III he is named as counsel in the year books. " [2]

The Yorkshire Poll Tax Rolls of 1379 listed Johannes de Cambrege as holding lands there at that time. [3]

Early History of the McCambridge family

This web page shows only a small excerpt of our McCambridge research. Another 82 words (6 lines of text) are included under the topic Early McCambridge History in all our PDF Extended History products and printed products wherever possible.

Before the last few hundred years, the English language had no fast system of spelling rules. For that reason, spelling variations are commonly found in early Anglo-Saxon surnames. Over the years, many variations of the name McCambridge were recorded, including Cambridge, Cambrigge, Cambrigg, McCambridge and others.

More information is included under the topic Early McCambridge Notables in all our PDF Extended History products and printed products wherever possible.

Migration of the McCambridge family to Ireland

Some of the McCambridge family moved to Ireland, but this topic is not covered in this excerpt. More information about their life in Ireland is included in all our PDF Extended History products and printed products wherever possible.

McCambridge migration to the United States +

To escape oppression and starvation at that time, many English families left for the "open frontiers" of the New World with all its perceived opportunities. In droves people migrated to the many British colonies, those in North America in particular, paying high rates for passages in cramped, unsafe ships. Although many of the settlers did not make the long passage alive, those who did see the shores of North America perceived great opportunities before them. Many of the families that came from England went on to make essential contributions to the emerging nations of Canada and the United States. Research into various historical records revealed some of first members of the McCambridge family emigrate to North America:

McCambridge Settlers in United States in the 18th Century

McCambridge Settlers in United States in the 19th Century

McCambridge Settlers in New Zealand in the 19th Century