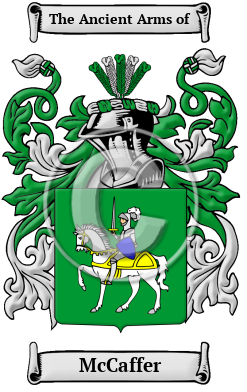 There are multitude of rich histories underlying the many Irish surnames in use today. The name McCaffer originally appeared in Gaelic as Mac Gafraidh. Gafraidh or Gothraidh equates with the English personal name Godfrey. Variations that start with the prefix Mac or Mc mean son of Godfrey.

Early Origins of the McCaffer family

The surname McCaffer was first found in County Fermanagh (Irish: Fear Manach) in the southwestern part of Northern Ireland, Province of Ulster, where they held a family seat at Ballymacaffrey near Five mile Town in Fermanagh near the Tyrone border. [1]

Early History of the McCaffer family

This web page shows only a small excerpt of our McCaffer research. Another 51 words (4 lines of text) covering the years 198 and 1987 are included under the topic Early McCaffer History in all our PDF Extended History products and printed products wherever possible.

The recording of names in Ireland in the Middle Ages was an inconsistent endeavor at best due to competing dialects and languages, and the general illiteracy of the population. Research into the name McCaffer revealed many spelling variations, including MacCaffery, MacCaffrey, MacCafferty, MacAffery, MacAffry, MacAfferty, MacGoffrey, MacGodfrey and many more.

More information is included under the topic Early McCaffer Notables in all our PDF Extended History products and printed products wherever possible.

Migration of the McCaffer family

Ireland experienced a dramatic decrease in its population during the late 19th century. This was in a great measure, a response to England's imperialistic policies. Hunger and disease took the lives of many Irish people and many more chose to leave their homeland to escape such hunger and disease. North America with its promise of work, freedom, and land was an extremely popular destination for Irish families. For those families that survived the journey, all three of these things were were often attained through much hard work and perseverance. Research into early immigration and passenger lists revealed many immigrants bearing the name McCaffer: Biddy MacCafferty who settled in Newcastle in 1804; Arthur, Charles, Daniel, Edward, Henry, Hugh, James, John, Patrick, and Robert MacCafferty all arrived in Philadelphia, Pennsylvania between 1840 and 1860.