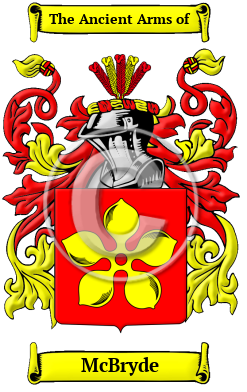 As a Scottish name, McBryde is derived from the Gaelic "Mac Gille Brighde," meaning "son of the servant of (St.) Brigit." The Scottish Gaelic word for church "cill Bríghde," became a place name (Kilbride, in Lanarkshire) and some bearers of McBryde may have originally taken their surnames from this.

Early Origins of the McBryde family

The surname McBryde was first found in Arran, an island in North Ayrshire (Gaelic: Siorrachd Inbhir Àir), formerly a county in the southwestern Strathclyde region of Scotland, that today makes up the Council Areas of South, East, and North Ayrshire, in the Firth of Clyde, where the name has long existed, although the name's earliest recorded roots are from County Donegal in Ireland. According to legend, both the Scottish and the Irish branches are descended from the son of the servant of (St.) Brigit, the virgin Abbess of Kildare who died 525 A.D.

Early History of the McBryde family

This web page shows only a small excerpt of our McBryde research. Another 80 words (6 lines of text) covering the years 1150, 1296, 1329, 1370, and 1476 are included under the topic Early McBryde History in all our PDF Extended History products and printed products wherever possible.

More information is included under the topic Early McBryde Notables in all our PDF Extended History products and printed products wherever possible.

In the United States, the name McBryde is the 9,003rd most popular surname with an estimated 2,487 people with that name. [1]

Migration of the McBryde family to Ireland

Some of the McBryde family moved to Ireland, but this topic is not covered in this excerpt.
Another 134 words (10 lines of text) about their life in Ireland is included in all our PDF Extended History products and printed products wherever possible.

McBryde migration to the United States +

McBryde Settlers in United States in the 19th Century