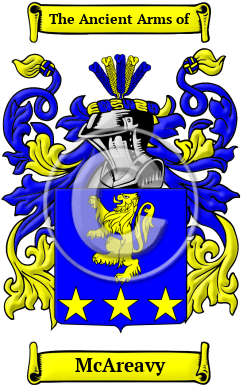 The name McAreavy has seen many modifications since the time in which it was first devised. In Gaelic it appeared as Mac Giolla Rua, which means son of the red-haired youth.

Early Origins of the McAreavy family

The surname McAreavy was first found in County Clare (Irish: An Clár) located on the west coast of Ireland in the province of Munster, where they were the Chiefs of Clonderlaw, conjecturally descended from Tiobraid, son of Iral Glunmhar, King of Ulster. [1]

Early History of the McAreavy family

This web page shows only a small excerpt of our McAreavy research. Another 148 words (11 lines of text) covering the years 1376, 1638 and 1640 are included under the topic Early McAreavy History in all our PDF Extended History products and printed products wherever possible.

Numerous spelling variations were revealed in the search for the origin of the name McAreavy family name. Before widespread literacy, a person entrusted the proper documentation of his name to the individual scribe. As a result, a name was often recorded under several different variations during the life of its bearer. Variations found include Gilroy, Kilroy, MacGilroy, MacElroy, MacGreevy, Greevy, MacGilrea, McGilroy, McElroy, McGreevy, McGilrea, MacIlrea, McIlrea, Magilroy, Magilrea, MacElry, McElry, MacIlree and many more.

More information is included under the topic Early McAreavy Notables in all our PDF Extended History products and printed products wherever possible.

Migration of the McAreavy family

Ireland, as an English-controlled colony in the 19th century, suffered the loss of hundreds of thousands of its native people. The system of land ownership often did not sufficiently provide for the tenants who farmed the land. This was most clearly evidenced in the Great Potato Famine of the 1840s. Previous years of great demand for grain products and livestock had run the land down. Many landowners foreseeing an upcoming crisis often removed families from the land or forced them to rely on pitifully small plots where only a subsistence living could be made. When the famines of 1845, 46, and 48 hit, many had nothing. Disease and starvation became widespread and families boarded ships for elsewhere any way they could. Those who went to America were instrumental in developing the industrial power known today: many Irish were employed in hard labor positions in factories and in building the bridges, canals, roads, and railways necessary for a strong industrial nation. Research of early immigration and passenger lists has shown that many bearers of the name McAreavy: John MacElroy, who landed in Pennsylvania in 1798; and James Gilroy, who settled in Pennsylvania in 1864; they also settled in Massachusetts, New York, and California between 1765 and 1854. The Kilroys also settled in the above states between the same periods. The 1984 edition of the &quot.