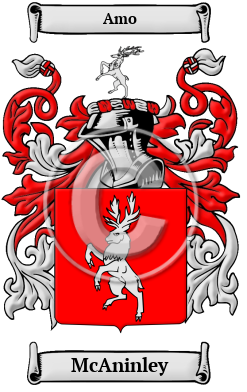 Early Origins of the McAninley family

The surname McAninley was first found in Perthshire (Gaelic: Siorrachd Pheairt) former county in the present day Council Area of Perth and Kinross, located in central Scotland, where the surname is still commonly found around Glenlyon and Balquhidder. The earliest known record of the name is from 1493, when Gillaspyk M'Kynlay witnessed legal proceedings involving Archibald, Earl of Argyll.

Early History of the McAninley family

This web page shows only a small excerpt of our McAninley research. Another 76 words (5 lines of text) covering the years 1511, 1675, and 1700 are included under the topic Early McAninley History in all our PDF Extended History products and printed products wherever possible.

Spelling variations are a very common occurrence in records of early Scottish names. They result from the repeated and inaccurate translations that many names went through in the course of various English occupations of Scotland. McAninley has been spelled MacKinley, MacKinlay, MacKindlay, MacKinly, MacKindley and many more.

Another 32 words (2 lines of text) are included under the topic Early McAninley Notables in all our PDF Extended History products and printed products wherever possible.

Migration of the McAninley family to Ireland

Some of the McAninley family moved to Ireland, but this topic is not covered in this excerpt.
Another 78 words (6 lines of text) about their life in Ireland is included in all our PDF Extended History products and printed products wherever possible.

Migration of the McAninley family

Numerous Scottish settlers settled along the east coast of the colonies that would become the United States and Canada. Others traveled to the open country of the west. At the time of the American War of Independence, some remained in the United States, while those who remained loyal to the crown went north to Canada as United Empire Loyalists. The highland games and Clan societies that sprang up across North America in the 20th century have helped many Scots to recover parts of their lost traditions. Research into passenger and immigration lists has revealed some of the very first McAninleys to arrive in North America: Alexander, John and Richard McKinlay, who settled in Philadelphia between 1840 and 1860; Alexander, David, Denis, George, Hugh, James, John, Mary, Samuel, Thomas and William McKinley all arrived in Philadelphia between 1800 and 1870.