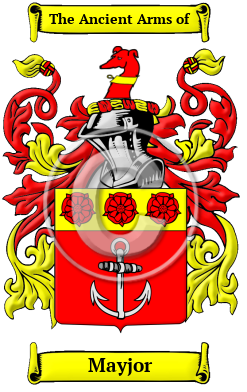 Mayjor is one of the names carried to England in the great wave of migration from Normandy following the Norman Conquest in 1066. It is based on the Norman given name Mauger. The name indicates one who is the son of Maugier, an Old French personal name, which is derived from the Old Germanic name Malger, which means council spear. [1]

Early Origins of the Mayjor family

The surname Mayjor was first found in Normandy where Mauguer was the third son of Richard I, Duke of Normandy and his second wife, Gunnora. He ruled as Count of Corbeil through his wife Germaine de Corbeil.

Mauger (or Malger) was the youngest son of Richard II and his second wife, Papia of Envermeu. He rose to become Archbishop of Rouen in 1037. However, as he opposed the marriage of Duke William and Matilda of Flanders in 1049, he was banished from Rouen to the Isle of Guernsey. There he married Gisella or Guille "without sanction of the Church, he formed an intimacy that resulted in numerous progeny, some of whom took their father's, others their mother's name. 'Hence,' observes a correspondent 'Guilles and Maugers are as plentiful as blackberries on the Channel Islands'"[2]. The Norman poet Wace (c.1110-1174), related stories of his life on the Channel Islands some 100 years later.

Another Mauger was royal clerk and physician before he was elected to the see of Worcester in 1199, a position held until his death in 1212. Sir Mathias Mayer (Mayor), originally a Jerseyman was ancestor of the Majors of Hampshire.

Over in England, "the font-name was fairly popular in the 13th century. Mauger is found as a single personal name in the Hundred Rolls." [3] However, the Hundred Rolls (Hundredorum Rolls) of 1273 had listings as a surname too: Thomas filius Mager in Lincolnshire; Walter Mauger in Cambridgeshire; and Richard Malgor in Buckinghamshire. [3]

Early History of the Mayjor family

This web page shows only a small excerpt of our Mayjor research. Another 55 words (4 lines of text) covering the years 1469, 1550, 1615, 1655 and are included under the topic Early Mayjor History in all our PDF Extended History products and printed products wherever possible.

Spelling variations in names were a common occurrence in the eras before English spelling was standardized a few hundred years ago. In the Middle Ages, even the literate regularly changed the spellings of their names as the English language incorporated elements of French, Latin, and other European languages. Many variations of the name Mayjor have been found, including Major, Mauger, Magor, Maior, Mayer, Mayor, Mager and others.

Another 29 words (2 lines of text) are included under the topic Early Mayjor Notables in all our PDF Extended History products and printed products wherever possible.

Migration of the Mayjor family to Ireland

Some of the Mayjor family moved to Ireland, but this topic is not covered in this excerpt.
Another 73 words (5 lines of text) about their life in Ireland is included in all our PDF Extended History products and printed products wherever possible.

Migration of the Mayjor family

For many English families, the social climate in England was oppressive and lacked opportunity for change. For such families, the shores of Ireland, Australia, and the New World beckoned. They left their homeland at great expense in ships that were overcrowded and full of disease. Many arrived after the long voyage sick, starving, and without a penny. But even those were greeted with greater opportunity than they could have experienced back home. Numerous English settlers who arrived in the United States and Canada at this time went on to make important contributions to the developing cultures of those countries. Many of those families went on to make significant contributions to the rapidly developing colonies in which they settled. Early North American records indicate many people bearing the name Mayjor were among those contributors: Peter Mager who settled in Virginia in 1663; John Major and Thomas Major who both settled in Virginia in 1645; as well as Adam Mager, who settled in Pennsylvania in 1738. Charles, James, John, and Peter Mager all arrived in Philadelphia between 1840 and 1860.