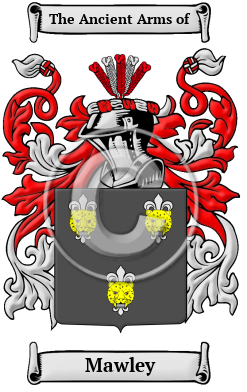 The Mawley name is habitational, derived from any of the several places so named; such as Morley in Cheshire, Derbyshire, County Durham, Norfolk, and West Yorkshire, and Moreleigh in Devon. These place names come from the Old English words "mor," meaning "marsh" and "le-ah," meaning "a clearing in the woods." [1]

Early Origins of the Mawley family

The surname Mawley was first found in Derbyshire at Morley, a parish, in the union of Belper, hundred of Morleston and Litchurch. [2]

Early History of the Mawley family

It is only in the last few hundred years that the English language has been standardized. For that reason, early Anglo-Saxon surnames like Mawley are characterized by many spelling variations. As the English language changed and incorporated elements of other European languages, even literate people changed the spelling of their names. Scribes and monks in the Middle Ages spelled names they sounded, so it is common to find several variations that refer to a single person. The variations of the name Mawley include: Morley, Mawley, Morely, Moorley, Maughley, Morleigh, Moorley and many more.

Distinguished members of the family include Thomas Morley (1557-1602) English organist, church composer, madrigalist, editor, and music printer from Norwich; Sir William Morley (c.1586-1658), a Member of Parliament for Guildford (1625-26), Member of Parliament for Chichester (1640-42), supported the Royalist cause in the English Civil War; George Morley...
Another 47 words (3 lines of text) are included under the topic Early Mawley Notables in all our PDF Extended History products and printed products wherever possible.

Migration of the Mawley family to Ireland

Some of the Mawley family moved to Ireland, but this topic is not covered in this excerpt.
Another 101 words (7 lines of text) about their life in Ireland is included in all our PDF Extended History products and printed products wherever possible.

Migration of the Mawley family