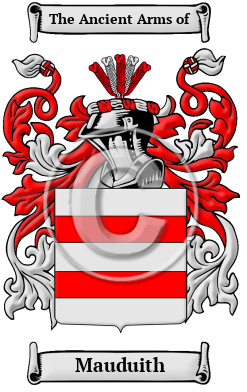 Early Origins of the Mauduith family

The surname Mauduith was first found in Hampshire where they held a family seat as Lords of the Manor. Conjecturally, the surname is descended from the tenant of the lands of Warminster who was recorded in the Domesday Book census of 1086. A family Mauduit were the Lords of the Hundred of Warminster, Wiltshire in the 12th century. And the manor of Shalden, Hampshire was held by William Mauduit at the time of the Domesday Survey. This family, of St. Martin du Bosc, Eure Etrepagny, held the manor into the 12th century. A family of this name was also on record in Northamptonshire by the 12th century. A William Maudit is said to have been a Chamberlain to William the Conqueror. A later William Mauduit (d. 1170) was Chamberlain to King Henry 1st. William Maudit (or Mauduit), 8th Earl of Warwick (c. 1220-1267) was an English nobleman and son of Alice de Beaumont (daughter of the 4th Earl) and William de Maudit. When he died, his estates passed to his sister, Isabel de Maudit who had married William de Beauchamp.

Early History of the Mauduith family

Another 31 words (2 lines of text) are included under the topic Early Mauduith Notables in all our PDF Extended History products and printed products wherever possible.

Migration of the Mauduith family