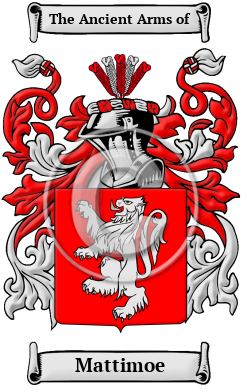 Early Origins of the Mattimoe family

The surname Mattimoe was first found in Roscommon (Irish: Ros Comáin) located in central Ireland in the province of Connacht, in the Boyle, where the family was a branch of the Silmurray.

Early History of the Mattimoe family

This web page shows only a small excerpt of our Mattimoe research. Another 34 words (2 lines of text) covering the years 1856 and 1883 are included under the topic Early Mattimoe History in all our PDF Extended History products and printed products wherever possible.

Notable amongst the family name at this time was the Milmo family of the parish of Ballisadare. To this family belongs Don Patricio Milmo, or Patrick Milmo born in Collooney, County Sligo, who made a...
Another 34 words (2 lines of text) are included under the topic Early Mattimoe Notables in all our PDF Extended History products and printed products wherever possible.

Mattimoe migration to the United States +

Mattimoe Settlers in United States in the 19th Century

Mattimoe Settlers in United States in the 20th Century