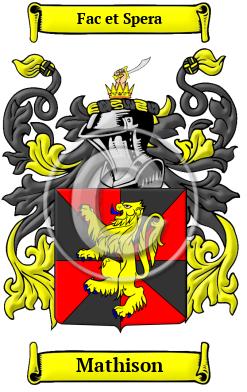 The Mathison family history stretches back to the clans of the Dalriadan kingdom on the sea-swept Hebrides islands and mountainous western coast of Scotland. The name Mathison is derived from the son of Matthew. [1] In Gaelic, the name was spelled M'Mhathain or Mathanach. The latter names in Gaelic were probably derived from Mac Mhathghamhuin which means son of the bear. Indeed, early references of the name have reference to the Scottish bear. [2] [3]

Today, early legal records provide a plethora of information about the family with various early spellings. Some of the first records include, "Robertus filius Mathei [who] witnessed a charter by Walter filius Alani, a. 1177. John Mathyson and Michael Mathowson were outlawed as part guilty of the slaughter of Walter de Ogilvy, Sheriff of Angus, in 1392." [3]

Early Origins of the Mathison family

The surname Mathison was first found in the Scottish Highlands were they could be found in Lochalsh, Lochcarron and Kintail. They are said to descend from Gilleoin of the ancient and royal house of Lorne. They gave their allegiance to the Clan MacDonald, the Lord of the Isles. Kenneth MacMathan (Cormac Mac Mathian) was the constable of Eilean Donan castle and is recorded in most accounts of the invasion of King Haakon IV of Norway against Scotland in the 13th century. One accounts suggests that McMathan and his clansmen fought under the Earl of Ross, defeating Haaken at Largs in 1263.

There is a record of Kermac Macmaghan in Inverness, receiving 20 cows from the Earl of Ross in 1264. "In the Norse Saga he is called Kjarmak son of Makamal = Corniac Macmathan. The Siol Mhathain, a sept of Matheson, in an old Gaelic song appears as Siol Mhothan. Matheson has been adopted as the English form of the name simply on account of the similarity of sound." [3]

Early History of the Mathison family

Spelling in the medieval era was a highly imprecise process. Translation, particularly from Gaelic to English, was little better. For these reasons, early Scottish names are rife with spelling variations. In various documents Mathison has been spelled Mathieson, MacMaghan, MacMathan MacMaken, Mathie, Mann and many more.

Notable amongst the Clan from early times was Margaret Matson, one of two women tried in Philadelphia for witchcraft in 1683; Sir James Nicolas Sutherland Matheson (1796-1878), born in Shiness, Lairg, who made a great fortune in the opium trade, and was created the 1st Baronet of Lewis in 1851. His family proceeded to buy the former Clan territories: James Matheson...
Another 60 words (4 lines of text) are included under the topic Early Mathison Notables in all our PDF Extended History products and printed products wherever possible.

In the United States, the name Mathison is the 5,334th most popular surname with an estimated 4,974 people with that name. [4]

Migration of the Mathison family to Ireland

Some of the Mathison family moved to Ireland, but this topic is not covered in this excerpt.
Another 30 words (2 lines of text) about their life in Ireland is included in all our PDF Extended History products and printed products wherever possible.

Mathison migration to the United States +

Settlers from Scotland put down roots in communities all along the east coast of North America. Some moved north from the American colonies to Canada as United Empire Loyalists during the American War of Independence. As Clan societies and highland games started in North America in the 20th century many Scots rediscovered parts of their heritage. Early North American records indicate many people bearing the name Mathison were among those contributors:

Mathison Settlers in United States in the 18th Century

Mathison Settlers in United States in the 19th Century

Mathison Settlers in New Zealand in the 19th Century

Historic Events for the Mathison family +