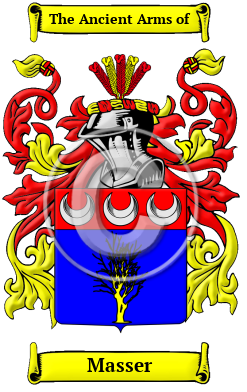 From the historical and enchanting region of France emerged a multitude of notable family names, including that of the distinguished Masser family. Originally, the people in this region went by one (personal) name. Surnames evolved during the Middle Ages when people began to assume an extra name to avoid confusion and to further identify themselves. These names then began to become "fixed" or hereditary between the generations. The Masser surname derives from the Old French word "masse," which refers to the heavy metal tipped war club called a mace; and as such was thought to have been an occupational name for a soldier who carried a mace. The surname may also have been taken on from any of several places with names such as Masse, LaMasse, Massé.

Early Origins of the Masser family

The surname Masser was first found in Savoy (French: Savoie) in the Rhône-Alpes region of the French Alps, where this celebrated family has held a family seat from ancient times.

Throughout the centuries, this family prospered and branched to several regions where members became prominent citizens of their respective areas. As a result of their prominence in society, the family members formed many alliances with other powerful families of the times and in this way, property and titles were exchanged according to the pacts.

From Lombardie, the family branched to Provence and by 1667 they were granted the titles of Lords of Rustrel, of Chauvet, of Serluc and of La Rouvière.

François Masse, born in 1722, son of Richard and Jeanne (née Jordan), travelled from Normandy to New France in the 18th century. After arriving in Quebec he married Marthe Paradis, born in 1718, at Rivière-Ouelle on 12th January 1745. They settled together in Rivière-Ouelle until his death on 27th May 1782. [1]

Early History of the Masser family

This web page shows only a small excerpt of our Masser research. Another 48 words (3 lines of text) covering the year 1667 is included under the topic Early Masser History in all our PDF Extended History products and printed products wherever possible.

Notable in the family name at this time was Énemond Massé (1574-1646), French Jesuit missionary from Lyon who arrived in Acadia with Pierre Biard in 1608, but later had to move to Bar Harbor, Maine; and Henri de Massue, 2nd Marquis de Ruvigny, afterward Earl of Galway PC (1648-1720), a French Huguenot soldier...
Another 52 words (4 lines of text) are included under the topic Early Masser Notables in all our PDF Extended History products and printed products wherever possible.

Masser migration to the United States +

Masser Settlers in United States in the 17th Century

Masser Settlers in United States in the 18th Century

Masser Settlers in United States in the 19th Century

Masser Settlers in New Zealand in the 19th Century