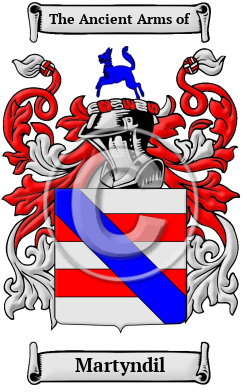 Martyndil is a name whose history is connected to the ancient Anglo-Saxon tribes of Britain. The name is derived from when the Martyndil family once lived in the settlement of Martindale in the county of Westmorland (now part of Cumbria). The surname Martyndil belongs to the large category of Anglo-Saxon habitation names, which are derived from pre-existing names for towns, villages, parishes, or farmsteads.

Early Origins of the Martyndil family

The surname Martyndil was first found in Westmorland, (now Cumbria.) "Martindale is the name of an old Cumberland family dating back to the 14th century, and holding much property in that shire up to the 17th century and later. An ecclesiastical district in Westmorland is thus called." [1] The valley of Martindale lies close to Hawes Water in the Lake District of England. The valley is accessed across Deepdale Beck from Patterdale which is eight miles from Ambleside. The chapelry of Martindale has remained small over the centuries having only 198 people by the late 1800s. [2] Many of the family were found in Yorkshire in the 15th century. The Corpus Christi Guild (Surtees Society) listed Katerina Martyngdale in 1475 and John Markyngdale in 1476. [3]

Early History of the Martyndil family

This web page shows only a small excerpt of our Martyndil research. Another 79 words (6 lines of text) covering the years 1623 and 1686 are included under the topic Early Martyndil History in all our PDF Extended History products and printed products wherever possible.

Sound was what guided spelling in the essentially pre-literate Middle Ages, so one person's name was often recorded under several variations during a single lifetime. Also, before the advent of the printing press and the first dictionaries, the English language was not standardized. Therefore, spelling variations were common, even among the names of the most literate people. Known variations of the Martyndil family name include Martindall, Martindale, Martyndale, Martyndall, Martyndate, Martyndell, Martynelle, Martynsdale, Martindate, Martindel, Martindell, Martinelle, Martinsdale, Martyngalle, Martyngall, Martinsdall, Martingale, Martingall, Martingdale and many more.

Another 36 words (3 lines of text) are included under the topic Early Martyndil Notables in all our PDF Extended History products and printed products wherever possible.

Migration of the Martyndil family

For political, religious, and economic reasons, thousands of English families boarded ships for Ireland, Canada, the America colonies, and many of smaller tropical colonies in the hope of finding better lives abroad. Although the passage on the cramped, dank ships caused many to arrive in the New World diseased and starving, those families that survived the trip often went on to make valuable contributions to those new societies to which they arrived. Early immigrants bearing the Martyndil surname or a spelling variation of the name include: Edward and Margaret (sometimes spelled Martindell) Martindale who arrived in Pennsylvania in 1682; John Martindale arrived in New York State in 1758; Thomas Martindale arrived in New York in 1820.