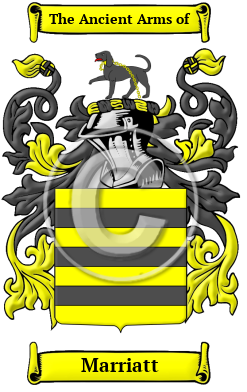 The name Marriatt was brought to England by the Normans when they conquered the country in 1066. The ancestors of the Marriatt family lived in Leicestershire. Their name, however, is a reference to the family's place of residence prior to the Norman Conquest of England in 1066, Marriot in Normandy. While many of the family settled in England, some stayed behind in Normandy as shown by Richard Mareta who was listed there (1180-1195.) [1]

Early Origins of the Marriatt family

The surname Marriatt was first found in Somerset at Merriott, a parish, in the union of Chard, hundred of Crewkerne. [2] This parish was listed in the Domesday Book of 1086 as Meriet [3] and possibly meant "boundary gate," from the Old English words "maere" + "geat." [4] Some of the first listings of the name include: Alric filius Meriet; and Aelric Meriete in 1066 and Aegel filius Mergeati c. 1086. Symon Meriet was listed in the Assize Rolls of 1202. [5] The Hundredorum Rolls of 1273 listed: John de Meriet in Lincolnshire; and Simon de Meriet in Somerset. [6]

Early History of the Marriatt family

This web page shows only a small excerpt of our Marriatt research. Another 84 words (6 lines of text) covering the years 1614, 1695, 1657, 1679, 1708, 1695 and 1698 are included under the topic Early Marriatt History in all our PDF Extended History products and printed products wherever possible.

The English language only became standardized in the last few centuries. For that reason, spelling variations are common among many Anglo-Norman names. The shape of the English language was frequently changed with the introduction of elements of Norman French, Latin, and other European languages; even the spelling of literate people's names were subsequently modified. Marriatt has been recorded under many different variations, including Marriott, Mariott, Marriot, Marritt, Marrot, Marrotte, Mariatt, Maryet, Maryott, Marryatt, Mariate, Merritt, Merriott and many more.

Outstanding amongst the family at this time was Augustine Marriott of London; Christopher Merret (Merrett) FRS (1614-1695), an English physician and scientist, the first to document the deliberate addition of sugar for the production...
Another 33 words (2 lines of text) are included under the topic Early Marriatt Notables in all our PDF Extended History products and printed products wherever possible.

Migration of the Marriatt family to Ireland

Some of the Marriatt family moved to Ireland, but this topic is not covered in this excerpt.
Another 57 words (4 lines of text) about their life in Ireland is included in all our PDF Extended History products and printed products wherever possible.

Migration of the Marriatt family

To escape the uncertainty of the political and religious uncertainty found in England, many English families boarded ships at great expense to sail for the colonies held by Britain. The passages were expensive, though, and the boats were unsafe, overcrowded, and ridden with disease. Those who were hardy and lucky enough to make the passage intact were rewarded with land, opportunity, and social environment less prone to religious and political persecution. Many of these families went on to be important contributors to the young nations of Canada and the United States where they settled. Marriatts were some of the first of the immigrants to arrive in North America: Robert Marriott settled in Jamaica in 1679; Samuel Marriott settled in Virginia in 1774; Henry Marriot settled in Virginia in 1646; Edward Marriott settled in Annapolis in 1758.