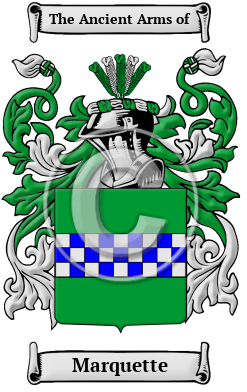 Early Origins of the Marquette family

The surname Marquette was first found in Languedoc, where the family has held a family seat since ancient times.

Throughout the centuries this ancient family expanded, developed, and grew in size and influence. Due to his great wealth, one of the descendants, Ramond de la Marca, was the primary owner of the possessions of the family. He owned lands that spread from the West Coast up to the river of Ariège and was a most respected person in his community as he contributed prominently to the region's affairs, either political or cultural.

In 1703 Jean Lamarque was the Counsellor at the Tribunal of Appeal in Palmiers. Following the strong tradition of his father, Jean-Samson Lamarque of Saint-Paulet became a famous Lawyer in Parliament in the 18th century. The family held to its beliefs through the years and, being very rich, noble Jean Victor Lamarque became the dominant owner of the fortune and the lands of St-Paulet, of Griffe and of St-Antoine in the 19th century.

Early History of the Marquette family

This web page shows only a small excerpt of our Marquette research. Another 96 words (7 lines of text) covering the years 1350, 1600, and 1703 are included under the topic Early Marquette History in all our PDF Extended History products and printed products wherever possible.

Another 45 words (3 lines of text) are included under the topic Early Marquette Notables in all our PDF Extended History products and printed products wherever possible.

Migration of the Marquette family

Some of the first settlers of this family name or some of its variants were: John Lamark settled in Philadelphia in 1834; François Lamarque settled in San Francisco in 1850.