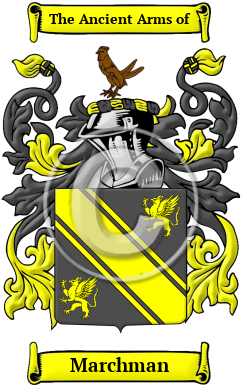 The surname Marchman was an occupational name for a merchant having derived from the Old French, Middle English word "marchant," which in turn came from the Late Latin "mercatans."

Early Origins of the Marchman family

The surname Marchman was first found in Buckinghamshire, where they held a family seat from early times and granted lands by King William for their assistance at the Battle of Hastings in 1066 A.D. They were originally from Normandy being tradesmen for Le Merchant. By 1180 they had been granted lands north of the border in Scotland when Rudolph Mercater held lands in Dunfermline.

Early History of the Marchman family

This web page shows only a small excerpt of our Marchman research. Another 68 words (5 lines of text) covering the years 1298 and 1676 are included under the topic Early Marchman History in all our PDF Extended History products and printed products wherever possible.

Spelling variations of this family name include: Merchant, Merchand, Marchand, Mercator and others.

Another 27 words (2 lines of text) are included under the topic Early Marchman Notables in all our PDF Extended History products and printed products wherever possible.

Migration of the Marchman family

Some of the first settlers of this family name or some of its variants were: Jeffry Merchant, who arrived in Virginia in 1637; Captain Merchant, who came to North Carolina in 1674; George and Emmanuel Merchant settled in Barbados in 1685.