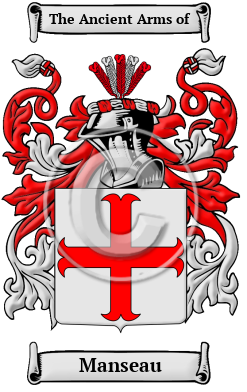 Early Origins of the Manseau family

The surname Manseau was first found in Normandy (French: Normandie), the former Duchy of Normandy, where the family has been a prominent family for centuries, and held a family seat with lands and manor. The family were well established in the region of Calvados and held a family seat in the arrondisement of Bayeux and several members of the family distinguished themselves through their contributions toward the community in which they lived and were rewarded with lands, titles and letters patent confirming their nobility. William de Moncels, who held allegiance to the Bishop of Coutances, was himself a Lord of Maers and Monceaux, counts of Nevers. He accompanied William the Conqueror into Normandy and was granted extensive lands in Devon and Somerset in England. The family were descended from Landry, first count of Nevers in 868. They descended Bodo I, seigneur of Maers and Monceaux.

Early History of the Manseau family

This web page shows only a small excerpt of our Manseau research. Another 87 words (6 lines of text) covering the years 1845, 1810, 1700 and 1782 are included under the topic Early Manseau History in all our PDF Extended History products and printed products wherever possible.

Another 40 words (3 lines of text) are included under the topic Early Manseau Notables in all our PDF Extended History products and printed products wherever possible.

Manseau Settlers in Canada in the 17th Century

Manseau Settlers in Canada in the 18th Century