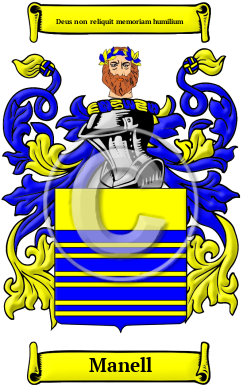 Manell is one of the thousands of new names that the Norman Conquest brought to England in 1066. The Manell family lived in De Grente-mesnil, from Grente-mesnil (now Grandmesnil) in the arrondissement of Lisieux, Normandy.

"Hugh de Grente-mesnil, a brave Souidler," fought stoutly at Hastings, and "was that day in great peril: his horse ran away with him, so that he was near falling, for in leaping over a bush the bridle rein broke, and the horse plunged forward. The English seeing him ran to meet him with their hatchets raised, but the horse took fright, and turning quickly round brought him safe back again." [1]

"Two years after the battle he was appointed, with Odo, Bishop of Bayeux, William Fitz Osbern, and others, one of the Justiciary of England during the King's absence in Normandy. He was Viscount of Leicestershire and Hampshire, and according to Domesday, held one hundred and four Lordships, of which two-thirds, with the Honour of Hinckley-in right whereof he was Lord High Steward of England-were in Leicestershire. He lived to be a very old man, and in 1094, 'being grown aged and infirm, he took upon him the habit of a Monk; and within six days afterwards departed this life, whereupon Bernard and David, two Monks of St. Ebrulfe's ' (a Norman monastery he had restored and endowed), 'having seasoned his Corps with Salt, and wrapped it in an Hide, conveyed it to Normandy, where it was honourably buried on the South side of their Chapter-house.' " [2]

Early Origins of the Manell family

The surname Manell was first found in Derbyshire during the reign of Henry II where "one of the most ancient possessions was Langley-Maynell, in that county, an estate which remained in the family till the end of the fourteenth century. A younger son at this period was seated at Yeaveley, his grandson at Willington." [3]

Confirming this early origin, another source notes: "The manor took its name of Meynell from an ancient family who possessed it so early as the reign of Edward III. and from whom it passed, by successive female heirs." [4]

But in 1669, Isaac Meynell, citizen of London bought the manor back from William Cavendish, Duke of Newcastle, only to have his only daughter and heiress convey the lands to the Cecils who again sold the lands back to another branch of the family of Meynell. By far the strongest branch of the family was found later in Staffordshire at Hore-Cross. [5]

The parish of Sowerby in the North Riding of Yorkshire was home to yet another branch of the family. "This place, at an early period, was the property of the Lascelles family, who in the reign of Elizabeth granted it to the Meynells, whose descendant Thomas Meynell, Esq., is now lord of the manor." [4]

Early History of the Manell family

This web page shows only a small excerpt of our Manell research. Another 299 words (21 lines of text) covering the years 1295, 1322 and 1336 are included under the topic Early Manell History in all our PDF Extended History products and printed products wherever possible.

Multitudes of spelling variations are a hallmark of Anglo Norman names. Most of these names evolved in the 11th and 12th century, in the time after the Normans introduced their own Norman French language into a country where Old and Middle English had no spelling rules and the languages of the court were French and Latin. To make matters worse, medieval scribes spelled words according to sound, so names frequently appeared differently in the various documents in which they were recorded. The name was spelled Meynell, Meynill, Meynil, Menel, Mannell, Maynell, Maynall and many more.

More information is included under the topic Early Manell Notables in all our PDF Extended History products and printed products wherever possible.

Migration of the Manell family

Because of this political and religious unrest within English society, many people decided to immigrate to the colonies. Families left for Ireland, North America, and Australia in enormous numbers, traveling at high cost in extremely inhospitable conditions. The New World in particular was a desirable destination, but the long voyage caused many to arrive sick and starving. Those who made it, though, were welcomed by opportunities far greater than they had known at home in England. Many of these families went on to make important contributions to the emerging nations of Canada and the United States. Analysis of immigration records indicates that some of the first North American immigrants bore the name Manell or a variant listed above: Conrad Mennell, who arrived in Baltimore in 1831; R. Mennell, who was naturalized in Pennsylvania in 1852; Christopher Meynell, who arrived in America in 1678.