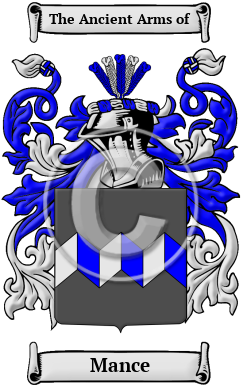 Early Origins of the Mance family

The surname Mance was first found in Bedfordshire (Old English: Bedanfordscir), where the first record of the family was the singular Minna, listed here in the Assize Rolls of 1202. Over one hundred years later, Gostelynus Mynne was found in the Subsidy Rolls of Suffolk in 1327. [1]

"This surname is derived from the name of an ancestor. 'the son of Min.' There is some evidence in favour of an old personal name Min, which was probably a nick. Minnie is still used as a girl's pet name for Emmeline. " [2]

Another researcher agrees: "This series seems to point to Minn, (the same as Mynn) as an ancient personal name." [3]

Early History of the Mance family

Distinguished members of the family include Sir Christopher Myngs (1625-1666), English Admiral and pirate who came of a Norfolk family. It "is said by Pepys to have been of very humble origin, ‘his father being always, and at this day, a shoemaker, and his mother, a hoyman's daughter, of which he was used frequently to boast’ (Diary, 13 June 1666; cf. 26 Oct. 1665). This is certainly exaggerated, if not entirely false. His parents were of well-to-do families in the north of Norfolk. His father, John Myngs, though described in the register of Salthouse, where he was married on 28 Sept...
Another 315 words (22 lines of text) are included under the topic Early Mance Notables in all our PDF Extended History products and printed products wherever possible.

In the United States, the name Mance is the 16,844th most popular surname with an estimated 2,487 people with that name. [4]

Mance migration to the United States +

Mance Settlers in United States in the 19th Century

Mance Settlers in Canada in the 17th Century

Mance Settlers in Canada in the 18th Century

Mance Settlers in Australia in the 19th Century