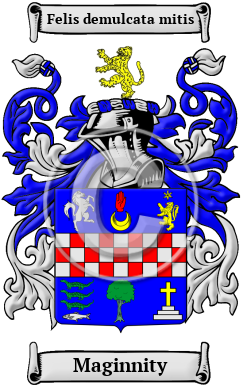 Hundreds of years ago, the Gaelic name used by the Maginnity family in Ireland was O Fionnachta, which is derived from the words "fionn," meaning "fair," and "sneachta," meaning "snow."

Early Origins of the Maginnity family

The surname Maginnity was first found in County Londonderry (Irish: Doire), a Northern Irish county also known as Derry, in the province of Ulster, where they held a family seat from very ancient times, enjoying a common heritage with the O'Cahans and the O'Neills. They were descended from the Princes of Limavady in Derry, specifically Conchobhar (Connor) a younger brother of Niall Frasach, brother of the King of Ireland. Descended from Connor was Gruagan of the Grogans, Dungan, Cathan, Cathusach, Dermod, to his son Con Cionntach, who was first to assume the name of MacGinty, which anglicized is MacGinty and Ginty.

Early History of the Maginnity family

This web page shows only a small excerpt of our Maginnity research. Another 54 words (4 lines of text) are included under the topic Early Maginnity History in all our PDF Extended History products and printed products wherever possible.

Pronunciation, rather than spelling, guided scribes and church officials when recording names during the Middle Ages. This practice often resulted in one person's name being recorded under several different spellings. Numerous spelling variations of the surname Maginnity are preserved in these old documents. The various spellings of the name that were found include Maginty, MacGinty, McGinty, Ginty, Ginity, Maginnity, O'Ginty, Genty, MacGenty and many more.

More information is included under the topic Early Maginnity Notables in all our PDF Extended History products and printed products wherever possible.

Migration of the Maginnity family

During the 19th century thousands of impoverished Irish families made the long journey to British North America and the United States. These people were leaving a land that had become beset with poverty, lack of opportunity, and hunger. In North America, they hoped to find land, work, and political and religious freedoms. Although the majority of the immigrants that survived the long sea passage did make these discoveries, it was not without much perseverance and hard work: by the mid-19th century land suitable for agriculture was short supply, especially in British North America, in the east; the work available was generally low paying and physically taxing construction or factory work; and the English stereotypes concerning the Irish, although less frequent and vehement, were, nevertheless, present in the land of freedom, liberty, and equality for all men. The largest influx of Irish settlers occurred with Great Potato Famine during the late 1840s. Research into passenger and immigration lists has brought forth evidence of the early members of the Maginnity family in North America: George and James McGinnity who settled in Philadelphia, Pennsylvania in 1850 and 1842 respectively; Bernard, Charles, Daniel, Edward, George, James, John, Matthew, Michael, Owen, Patrick, Samuel, Thomas, and Timothy McGinty who settled in Philadelphia between 1846 and 1866.