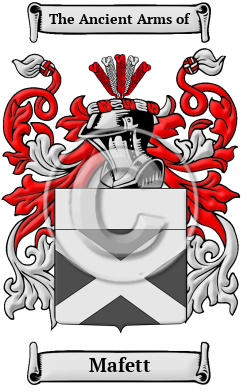 Mafett is an ancient Scottish name that was first used by the Strathclyde-Briton people of the Scottish/English Borderlands. It is a name for someone who lived in the place called Moffatt, in Scotland. The place-name is derived from the Gaelic words magh and fada, which mean field and long. Hence, the surname Mafett means, from the long field.

Early Origins of the Mafett family

The surname Mafett was first found in Dumfriesshire (Gaelic: Siorrachd Dhùn Phris), a Southern area, bordering on England that today forms part of the Dumfries and Galloway Council Area, at Annandale where the first on record was Nicholas de Mufet who began his life as a simple cleric and was first recorded as witness to a charter by Walter, bishop of Glasgow, some time before 1232. Approximately twenty years later, in 1250, he was made Archdeacon of Theuidale and eventually, in 1268, he was made Bishop of Glasgow. After only two years of holding the position of bishop, he died, in the year 1270. [1]

Early History of the Mafett family

Notable amongst the family at this time was Thomas Muffet (also Moufet, Mouffet, or Moffet) (1553-1604), an English naturalist and physician, best known for his Puritan beliefs, his study of insects in regard to medicine; and Robert Moffat (1795-1883). Starting off as a gardener, he decided to become a missionary...
Another 49 words (4 lines of text) are included under the topic Early Mafett Notables in all our PDF Extended History products and printed products wherever possible.

Migration of the Mafett family to Ireland

Some of the Mafett family moved to Ireland, but this topic is not covered in this excerpt.
Another 70 words (5 lines of text) about their life in Ireland is included in all our PDF Extended History products and printed products wherever possible.

Migration of the Mafett family

Unrest, poverty, and persecution caused thousands to look for opportunity and freedom in the North American colonies. The crossing was long, overcrowded, and unsanitary, though, and came only at great expense. Many Strathclyde families settled on the east coast of North America in communities that would form the backbone of what would become the great nations of the United States and Canada. The American War of Independence caused those who remained loyal to England to move north to Canada as United Empire Loyalists. In the 20th century, Strathclyde and other Scottish families across North America began to recover their collective heritage through highland games and Clan societies. Among them: Jean Moffat who settled in New Jersey in 1685; Thomas Moffatt settled in Boston Massachusetts in 1712; William Moffert settled in Philadelphia, Pennsylvania in 1880.