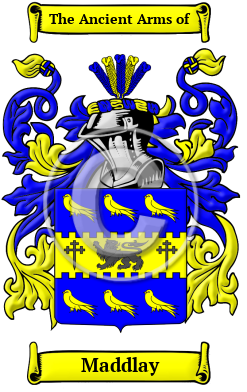 Early Origins of the Maddlay family

The surname Maddlay was first found in Greater Manchester at Matley, a township, in the parish of Mottramin-Longdendale, union of Ashton, hundred of Macclesfield, formerly in the county of Chester. Some of the first records of the name include William de Mattelegh, Hugh de Mattelegh and Richard de Mattlegh who were all listed in Cheshire in 1316, 1316 and 1300. [1] In 1325 William held the estates in the parish of Mottram.

Early History of the Maddlay family

This web page shows only a small excerpt of our Maddlay research. Another 75 words (5 lines of text) covering the years 1455 and 1487 are included under the topic Early Maddlay History in all our PDF Extended History products and printed products wherever possible.

More information is included under the topic Early Maddlay Notables in all our PDF Extended History products and printed products wherever possible.

Migration of the Maddlay family

Some of the first settlers of this family name or some of its variants were: the name represented in many forms and recorded from the mid 17th century in the great migration from Europe. Migrants settled in the eastern seaboard from Newfoundland, to Maine, to Virginia, the Carolinas, and to the islands. John Matley was granted land in Virginia in 1652. William Matley was naturalized in Indiana in 1848.