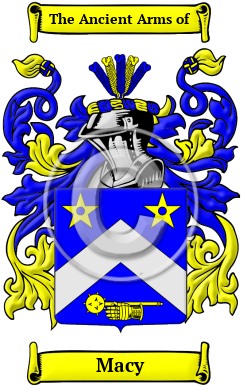 Early Origins of the Macy family

The surname Macy was first found in Cheshire, but looking back further, this Norman family originated at Macey in Manche, Normandy and Hamon Massie arrived in England with the Conqueror and was granted the lands of Dunham-Massey in Cheshire. He was a tenant of Lupus, Earl of Chester.

"In 1086 Hugh de Maci held lands in Huntingdonshire [2], and Hamo or Hamund de Maci held nine lordships in barony from Hugh Lupus in Cheshire, and 1193 subscribed the foundation charter of Chester Abbey, and granted lands to it." [1]

"The present town of Dunham-Massey, 'the home of the Masseys on the downs,' takes its name from this Hamon, one of the Palatinate barons, who there built his castle, and made it the head of his honour. His descendants held it for more than two hundred and seventy years, five generations in succession bearing his name." [3]

By the time of the Hundredorum Rolls of 1273, the name was scattered throughout England as seen by the following entries found there: Alan Macey and Henry Macy in Suffolk; Robert de Maysey and William de Macy in Wiltshire; and Walter Masci in Huntingdon. [4]

"The Massies of Sale, who gave their name to Saughall Massie, and had branched off as early as the time of King John, ended in 1685 with Richard Massy and his seven daughters. Of this line were the Massies of Backford and Timperley, whose last heir died in the time of Henry V.: the Massies of Edgeley, still flourishing under James I.: the Mascys of Godley, and probably those of Hough and Kelshall. The Masseys that were seated at Crossley till 1600." [3]

Early History of the Macy family

Endless spelling variations are a prevailing characteristic of Norman surnames. Old and Middle English lacked any definite spelling rules, and the introduction of Norman French added an unfamiliar ingredient to the English linguistic stew. French and Latin, the languages of the court, also influenced spellings. Finally, Medieval scribes generally spelled words according to how they sounded, so one person was often referred to by different spellings in different documents. The name has been spelled Macy, Macey and others.

Outstanding amongst the family at this time was General Edward Massey who fought with Charles I at Worcester; Thomas Mace (c.1612-1706), an English lutenist, viol player, singer...
Another 27 words (2 lines of text) are included under the topic Early Macy Notables in all our PDF Extended History products and printed products wherever possible.

In the United States, the name Macy is the 7,894th most popular surname with an estimated 2,487 people with that name. [5]

Migration of the Macy family to Ireland

Some of the Macy family moved to Ireland, but this topic is not covered in this excerpt.
Another 55 words (4 lines of text) about their life in Ireland is included in all our PDF Extended History products and printed products wherever possible.

Macy migration to the United States +

To escape the political and religious persecution within England at the time, many English families left for the various British colonies abroad. The voyage was extremely difficult, though, and the cramped, dank ships caused many to arrive in the New World diseased and starving. But for those who made it, the trip was most often worth it. Many of the families who arrived went on to make valuable contributions to the emerging nations of Canada and the United States. An inquiry into the early roots of North American families reveals a number of immigrants bearing the name Macy or a variant listed above:

Macy Settlers in United States in the 17th Century

Macy Settlers in United States in the 19th Century