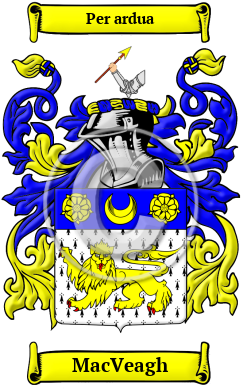 Early Origins of the MacVeagh family

The surname MacVeagh was first found in Connacht (Irish: Connachta, (land of the) descendants of Conn), where they held a family seat from ancient times. Today the name is numerous in north-east Ulster but back in the 17th century it was mainly recorded in Antrim, Armagh and Donegal as McVagh, McVaugh and McEvagh. [1]

Early History of the MacVeagh family

This web page shows only a small excerpt of our MacVeagh research. Another 44 words (3 lines of text) covering the years 1541, 1541 and 1798 are included under the topic Early MacVeagh History in all our PDF Extended History products and printed products wherever possible.

Another 36 words (3 lines of text) are included under the topic Early MacVeagh Notables in all our PDF Extended History products and printed products wherever possible.

MacVeagh migration to the United States +

MacVeagh Settlers in United States in the 18th Century

MacVeagh Settlers in United States in the 19th Century