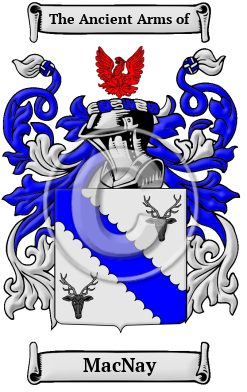 The spelling and overall form of Irish names tend to vary widely. The original Gaelic form of the name MacNay is Mac Neidhe, which is derived from the word niadh, which means champion.

Early Origins of the MacNay family

The surname MacNay was first found in County Down (Irish:An Dún) part of the Province of Ulster, in Northern Ireland, formerly known as county St Mirren, where they held a family seat from ancient times.

Early History of the MacNay family

This web page shows only a small excerpt of our MacNay research. Another 112 words (8 lines of text) covering the year 1037 is included under the topic Early MacNay History in all our PDF Extended History products and printed products wherever possible.

Many different spelling variations of the surname MacNay were found in the archives researched. These included Scribes and church officials generally spelled a name as it sounded; as a result, a person's name could be spelt innumerable ways in his lifetime. MacNee, MacNea, MacNay, MacKnee, MacNeigh, MacNia, Nee, Knee and many more.

More information is included under the topic Early MacNay Notables in all our PDF Extended History products and printed products wherever possible.

Migration of the MacNay family

North America received thousands of Irish immigrants from the English-ruled Ireland during the 19th century. Once in the United States or what would become Canada, these immigrants quickly contributed to the ongoing settling and industrialization processes. The largest influx of Irish settlers occurred with Great Potato Famine of the late 1840s. An exhaustive examination of immigrant and passenger lists has shown many early immigrants bearing the surname of MacNay: Alexander McNay settled in San Francisco in 1852; Martin, Lawrence, John and James McNee settled in Philadelphia between 1840 and 1870. Members of the family settled in Newfoundland, where William Knee was born in 1821..