Among the the peoples of ancient Scotland, the first to use the name MacLouies were the Strathclyde-Britons. MacLouies was a name for someone who lived in the barony of Fullertoun in the parish of Dundonald in Ayrshire. That the family assumed the name of where they lived is often indicative the degree of power and influence they held in that area. MacLouies is most definitely such a name, easily identified by the suffix "-ton", meaning "settlement" or "town".

The place in question is almost certainly Fullerton, near Ayr or possibly Foulertoun near Forfar, both in Scotland. Both of these towns derive their name from the word "fuglere", meaning "bird-catcher" (the English word "fowler" has the same origin), indicating that fowl was the primary product of these towns.

Fullarton "which is situated on the southwestern bank of the river Irvine, derives its name from its ancient proprietors, the Fullartons, by one of whom a convent was founded in 1240, on the site of the present town, and amply endowed for friars of the Carmelite order. " [1] 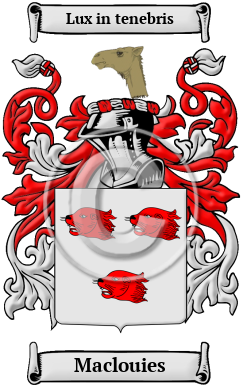 Early Origins of the MacLouies family

The surname MacLouies was first found in Ayrshire (Gaelic: Siorrachd Inbhir Àir), formerly a county in the southwestern Strathclyde region of Scotland, that today makes up the Council Areas of South, East, and North Ayrshire. The earliest evidence of the Fullerton family appeared in the mid 13th century, with Alanus de Fowlertoun who founded and endowed out of his lands a convent of Carmelite or White Friars at Irvine. He died circa 1280 and was succeeded by his son Adam de Fowlerton, who had a charter of the lands of Foullartous and Gaylis in Kyle Stewart a few years after his father's death.

A branch of his family settled in Arran and are said to have received from King Robert the Bruce a charter of the lands of Kilmichael with the office of coroner and the honorary title of Falconer to the King, in 1307. These estates were held for several centuries and in later years the family branched to Kinnaber in Angus. [2]

Gradually many of the estates were lost by marriage, and one of the last was Ballintoy Castle in County Antrim, Ireland which was acquired by the Downings in marriage. From the appointment by Bruce on, a long series of titles belonged to this respectable family. Rankin de Fowlartoun was the dominus de Corsby in the early 15th century and John Fullarton was first minister of Sanquhar after the Reformation.

The most prestigious title held by the family came, however, in 1327 when Robert I granted to Galfridus de Foullertoune (whose name is also recorded as Galfredus Fullerton) the land of Oulertoun in the sheriffdom of Forfar and the hereditary office of falconer within the sheriffdom. The estate was held by the Fullartons for over 120 years before they transferred themselves to the parish of Meigle, in which there are lands which bear the name to this day. [2]

Early History of the MacLouies family

Medieval Scottish names are rife with spelling variations. This is due to the fact that scribes in that era spelled according to the sound of words, rather than any set of rules. MacLouies has been spelled Fullerton, Fullarton, Foulerton, Fowlerton, McCoy and others.

Notable amongst the family at this time was Mr. John Fullerton, Esq. Thribergh in the West Riding of Yorkshire was home to this gentleman for some time. "The parish comprises 1,624a. lr. 27p., of which about 800 acres are arable, 770 pasture, and about 30 woodland, all the property of John Fullerton, Esq., lord of the manor. The soil...
Another 59 words (4 lines of text) are included under the topic Early MacLouies Notables in all our PDF Extended History products and printed products wherever possible.

Migration of the MacLouies family to Ireland

Some of the MacLouies family moved to Ireland, but this topic is not covered in this excerpt.
Another 303 words (22 lines of text) about their life in Ireland is included in all our PDF Extended History products and printed products wherever possible.

Migration of the MacLouies family

Many Scots were left with few options other than to leave their homeland for the colonies across the Atlantic. Some of these families fought to defend their newfound freedom in the American War of Independence. Others went north to Canada as United Empire Loyalists. The ancestors of all of these families have recently been able to rediscover their roots through Clan societies and other Scottish organizations. Among them: Alexander Fullerton who settled in Virginia in 1684.