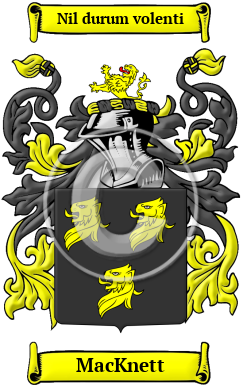 Early Origins of the MacKnett family

The surname MacKnett was first found in Kirkcudbright, where they held a family seat from early times and their first records appeared on the early census rolls taken by the early Kings of Britain to determine the rate of taxation of their subjects.

Early History of the MacKnett family

This web page shows only a small excerpt of our MacKnett research. Another 60 words (4 lines of text) are included under the topic Early MacKnett History in all our PDF Extended History products and printed products wherever possible.

More information is included under the topic Early MacKnett Notables in all our PDF Extended History products and printed products wherever possible.

Migration of the MacKnett family to Ireland

Some of the MacKnett family moved to Ireland, but this topic is not covered in this excerpt.
Another 68 words (5 lines of text) about their life in Ireland is included in all our PDF Extended History products and printed products wherever possible.

Migration of the MacKnett family

Some of the first settlers of this family name or some of its variants were: Alexander, Andrew, David, Douglas, George, Hugh, James, John, Robert, Samuel and William McKnight all arrived in Philadelphia between 1840 and 1860; Robert McNaight settled in Charleston in 1763..

Motto: Nil durum volenti
Motto Translation: Nothing is difficult for the willing.