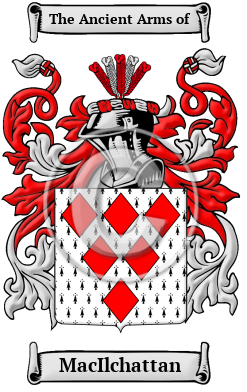 The root of the ancient Dalriadan-Scottish name MacIlchattan is a devotion to St. Catan, a saint of whom little is known but who was revered throughout the west coast of Scotland between the islands of Bute and Skye. The Gaelic form of the name was Mac Gille Chatain, which means son of St. Catan's servant.

Early Origins of the MacIlchattan family

The surname MacIlchattan was first found in the area of Argyllshire on the Isle of Bute, and literally translated means the "servant of St. Catan," the patron saint of Bute, Skye, Colonsay, Gigha. St. Catan was said to have lived at the Abbey of Inchaffray on the isle of Skye.

Early History of the MacIlchattan family

This web page shows only a small excerpt of our MacIlchattan research. Another 61 words (4 lines of text) covering the years 1424, 1465, 1672, 1670 and 1685 are included under the topic Early MacIlchattan History in all our PDF Extended History products and printed products wherever possible.

Historical recordings of the name MacIlchattan include many spelling variations. They include They are the result of repeated translations of the name from Gaelic to English and inconsistencies in spelling rules. McIlhatton, McElhatton, McElhatten, McGillecattan, McIlchattan, McHilhatton, Makelatyn, Macklehatton, McHatton and many more.

More information is included under the topic Early MacIlchattan Notables in all our PDF Extended History products and printed products wherever possible.

Migration of the MacIlchattan family to Ireland

Some of the MacIlchattan family moved to Ireland, but this topic is not covered in this excerpt. More information about their life in Ireland is included in all our PDF Extended History products and printed products wherever possible.

Migration of the MacIlchattan family

Descendents of Dalriadan-Scottish families still populate many communities across North America. They are particularly common in Canada, since many went north as United Empire Loyalists at the time of the American War of Independence. Much later, in the late 19th and early 20th centuries, the highland games and Clan societies that now dot North America sprang up, allowing many Scots to recover their lost national heritage. Some of the first immigrants to cross the Atlantic and come to North America bore the name MacIlchattan, or a variant listed above: James McElhatten settled in Philadelphia, Pennsylvania in 1866; Arthur, Alexander, Cornelius, and John McIlhattan and McIlhatten settled in Philadelphia, Pennsylvania between 1860 and 1866.