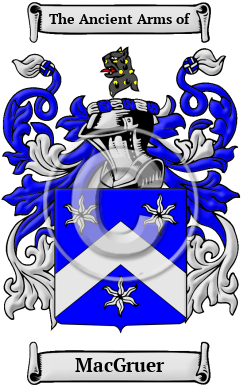 In the Scotland of ancient times, MacGruer was a name for a brewster or brewer. MacGruer is an occupational name, given to someone who held the occupation of a brewer of ale. The inclusion of the feminine suffix -ster, indicates that this was originally a woman's occupation. Members of the MacGruer family were originally found in Lanarkshire, where the family can trace its origin to shortly after the Norman Conquest, in 1066.

Early Origins of the MacGruer family

The surname MacGruer was first found in Lanarkshire (Gaelic: Siorrachd Lannraig) a former county in the central Strathclyde region of Scotland, now divided into the Council Areas of North Lanarkshire, South Lanarkshire, and the City of Glasgow. The Scord of Brouster is one of the earliest Neolithic farm sites in Shetland, Scotland dating back to 2220 BC. Some of the earliest records of the family include: Nicholaus, braciator regis (i.e. the king's brewer), was present at the perambulation of lands in 1219; Johannes the 'braciator' was one of the 'native men' of the Abbey of Dunfermline in the thirteenth century; and Thomas le Breuester of the forest of Passeley in the county of Lanark rendered homage in 1296. [1]

Early History of the MacGruer family

Medieval spelling was at best an intuitive process, and translation between Gaelic and English was no more effective. These factors caused an enormous number of spelling variations in Dalriadan names. In fact, it was not uncommon to see a father and son who spelled their name differently. Over the years, MacGruer has been spelled Brewster, Broster, Brouster, Brewester, Brostar and many more.

Notable amongst the family at this time was Robert Brewster (1599-1663), an English politician and officer who sat in the House of Commons between 1645 and 1659, he was a general in the Parliamentary army in the English Civil War; Francis Brewster (1623- 1671), an English politician who sat in the House of Commons in 1653 and 1656; and Elder William Brewster (c.1560-1644), Pilgrim colonist leader and preacher born in Doncaster...
Another 71 words (5 lines of text) are included under the topic Early MacGruer Notables in all our PDF Extended History products and printed products wherever possible.

Migration of the MacGruer family to Ireland

Some of the MacGruer family moved to Ireland, but this topic is not covered in this excerpt.
Another 65 words (5 lines of text) about their life in Ireland is included in all our PDF Extended History products and printed products wherever possible.

The hardy Scots who made the crossing settled all along the east coast of North America and in the great west that was just then opening up. At the time of the American War of Independence, many United Empire Loyalists moved north from the American colonies to Canada. Scottish national heritage became better known in North America in the 20th century through highland games and other patriotic events. An examination of immigration records and passenger ship lists revealed that people bearing the name MacGruer arrived in North America very early:

MacGruer Settlers in Canada in the 18th Century