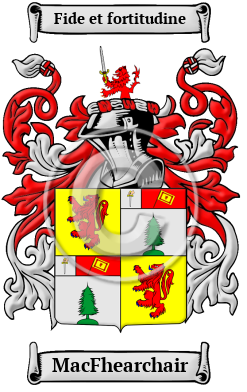 Early Origins of the MacFhearchair family

The surname MacFhearchair was first found in Aberdeenshire (Gaelic: Siorrachd Obar Dheathain), a historic county, and present day Council Area of Aberdeen, located in the Grampian region of northeastern Scotland, where the family has a long and distinguished history dating back to the early Middle Ages. They claim descent from Farquhar Mackintosh who arrived in Braemar in 1382. The Clan was one of the principal members of the Clan Chattan (the Clan of the Cat), a powerful 26 Clan confederation. Accordingly, they rank as a sept of the Clan Chattan. Their alliance with the MacKintoshes was particularly strong and this proved quite advantageous, as the MacKintoshes were the captains of the Clan.

Early History of the MacFhearchair family

This web page shows only a small excerpt of our MacFhearchair research. Another 173 words (12 lines of text) covering the years 1350, 1699 and 1782 are included under the topic Early MacFhearchair History in all our PDF Extended History products and printed products wherever possible.

In the Middle ages, spelling and translation were not yet regulated by any general rules. spelling variations in names were common even among members of one family unit. MacFhearchair has appeared Farquharson, Farqharson, Farquharsen, MacFhearchair (Gaelic), Caraher and many more.

Another 28 words (2 lines of text) are included under the topic Early MacFhearchair Notables in all our PDF Extended History products and printed products wherever possible.

Migration of the MacFhearchair family to Ireland

Some of the MacFhearchair family moved to Ireland, but this topic is not covered in this excerpt.
Another 33 words (2 lines of text) about their life in Ireland is included in all our PDF Extended History products and printed products wherever possible.

Migration of the MacFhearchair family

Faced by this persecution and the generally unstable political climate of those days, many Scots chose to leave their homeland for Ireland, Australia, and North America in search of greater opportunity and freedom. The colonies across the Atlantic were the most popular choice, but a passage there was neither cheap nor easily suffered. Passengers arrived sick and poor, but those who made it intact often found land and more tolerant societies in which to live. These brave settlers formed the backbone of the burgeoning nations of Canada and the United States. It is only this century that the ancestors of these families have begun to recover their collective identity through the patriotic highland games and Clan societies that have sprung up throughout North America. Research into early immigration and passenger lists revealed many immigrants bearing the name MacFhearchair: Harry Farquharson, who came to Virginia in 1716; Alexander Farquharson, who is on record in Halifax Nova Scotia in 1795; Alexander Farquharson, along with John, Donald, Duncan, Peter and William, were among Scots banished to the American Plantations (Barbados) in 1745-7. Other records show John Farquharsen settling in Savanna, Georgia in 1822.