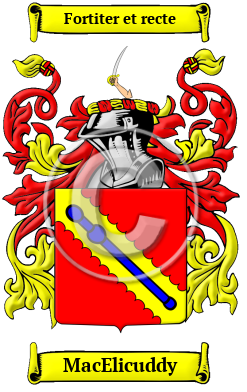 The ancestors of the first family to use the name MacElicuddy lived among the ancient Scottish people called the Picts. The MacElicuddy family lived in Liddesdale and Teviotdale where the family has a long and distinguished history dating back to the early Middle Ages. The name is actually derived from the Old English personal name Elwald or Aelfwald, but this name is now all but extinct as a personal name.

Early Origins of the MacElicuddy family

The surname MacElicuddy was first found in Liddesdale, and Teviotdale. Although originally from Elliott, a village near Forfar, this Clan was persuaded by the Douglases to move south to help defend the border in 1396. There they became one of the most influential clans. Some of the notable personalities were "Archie Fire the Braes," "Hob of the Park," "Little Jock of the Park," "Jock Half Lugs," "Jock A'God's Name," "Gibbe Wi' the Gowden Gartens."

Early History of the MacElicuddy family

In the Middle ages, spelling and translation were not yet regulated by any general rules. spelling variations in names were common even among members of one family unit. MacElicuddy has appeared Elliott, Elliot, Eliot, Eliott, Ellegett, Ellegot, Ellecot, Ellacott, Ellacot, Ellgate, Ellett, Ellit and many more.

Notable amongst the Clan at this time was Sir John Eliot (1592-1632), an English statesman who was serially imprisoned in the Tower of London by King Charles I for advocating the rights and privileges of Parliament; George Elliott (ca. 1636-1668), English surgeon to the Earl of Teviot's Regiment; John Eliot (c. 1604-1690), English Puritan missionary to the American Indians from Widford, Hertfordshire; John Eliot...
Another 63 words (4 lines of text) are included under the topic Early MacElicuddy Notables in all our PDF Extended History products and printed products wherever possible.

Migration of the MacElicuddy family to Ireland

Some of the MacElicuddy family moved to Ireland, but this topic is not covered in this excerpt.
Another 80 words (6 lines of text) about their life in Ireland is included in all our PDF Extended History products and printed products wherever possible.

Migration of the MacElicuddy family

Faced by this persecution and the generally unstable political climate of those days, many Scots chose to leave their homeland for Ireland, Australia, and North America in search of greater opportunity and freedom. The colonies across the Atlantic were the most popular choice, but a passage there was neither cheap nor easily suffered. Passengers arrived sick and poor, but those who made it intact often found land and more tolerant societies in which to live. These brave settlers formed the backbone of the burgeoning nations of Canada and the United States. It is only this century that the ancestors of these families have begun to recover their collective identity through the patriotic highland games and Clan societies that have sprung up throughout North America. Research into early immigration and passenger lists revealed many immigrants bearing the name MacElicuddy: Lewis Ellett who settled in Virginia in 1721; Margeret Ellgate settled in Barbados in 1635; Michael Elligot settled in Quebec in 1825; George, Hugh, Joseph, Robert, and Thomas Elliott settled in Philadelphia between 1800 and 1840.