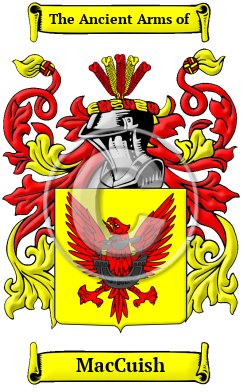 Early Origins of the MacCuish family

The surname MacCuish was first found in on the Isle of Uist, in the Hebrides in Scotland, which is named for the Irish King, Colla Uais who was deposed in Ireland by Muedach Tireach and was banished with 300 of their principal chiefs to the Hebrides in 327 A.D. They became known as the kingdom of Ailech and gave birth to the kindred of St. Columba and the Abbots of Iona. Descended were the Kings of Scotland from 1034 to 1286. The MacDonalds, Kings of the Isles were descended through Somerled to MacCuish or MacCooish.

Early History of the MacCuish family

This web page shows only a small excerpt of our MacCuish research. Another 113 words (8 lines of text) are included under the topic Early MacCuish History in all our PDF Extended History products and printed products wherever possible.

The translation of Gaelic names in the Middle Ages was not a task undertaken with great care. Records from that era show an enormous number of spelling variations, even in names referring to the same person. Over the years MacCuish has appeared as MacCuish, MacCooish, MacCuis, MacCoise, MacKewish, MacKewsh and many more.

More information is included under the topic Early MacCuish Notables in all our PDF Extended History products and printed products wherever possible.

Migration of the MacCuish family

Dalriadan families proliferated in North America. Their descendants still populate many communities in the eastern parts of both the United States and Canada. Some settled in Canada as United Empire Loyalists, in the wake of the American War of Independence. Families on both sides of the border have recovered much of their heritage in the 20th century through Clan societies and highland games. Analysis of immigration records indicates that some of the first North American immigrants bore the name MacCuish or a variant listed above: John McCoosh settled in Pennsylvania in 1714.