MacCrewer comes from the kingdom of Dalriada in ancient Scotland. It was a name for a person who worked as a brewster or brewer. MacCrewer is an occupational name, given to someone who held the occupation of a brewer of ale. The inclusion of the feminine suffix -ster, indicates that this was originally a woman's occupation. Members of the MacCrewer family were originally found in Lanarkshire, where the family can trace its origin to shortly after the Norman Conquest, in 1066. 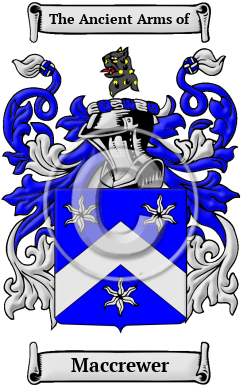 Early Origins of the MacCrewer family

The surname MacCrewer was first found in Lanarkshire (Gaelic: Siorrachd Lannraig) a former county in the central Strathclyde region of Scotland, now divided into the Council Areas of North Lanarkshire, South Lanarkshire, and the City of Glasgow. The Scord of Brouster is one of the earliest Neolithic farm sites in Shetland, Scotland dating back to 2220 BC. Some of the earliest records of the family include: Nicholaus, braciator regis (i.e. the king's brewer), was present at the perambulation of lands in 1219; Johannes the 'braciator' was one of the 'native men' of the Abbey of Dunfermline in the thirteenth century; and Thomas le Breuester of the forest of Passeley in the county of Lanark rendered homage in 1296. [1]

Early History of the MacCrewer family

Historical recordings of the name MacCrewer include many spelling variations. They are the result of repeated translations of the name from Gaelic to English and inconsistencies in spelling rules. They include Brewster, Broster, Brouster, Brewester, Brostar and many more.

Notable amongst the family at this time was Robert Brewster (1599-1663), an English politician and officer who sat in the House of Commons between 1645 and 1659, he was a general in the Parliamentary army in the English Civil War; Francis Brewster (1623- 1671), an English politician who sat in the House of Commons in 1653 and 1656; and Elder William Brewster (c.1560-1644), Pilgrim colonist leader and preacher born in Doncaster...
Another 71 words (5 lines of text) are included under the topic Early MacCrewer Notables in all our PDF Extended History products and printed products wherever possible.

Migration of the MacCrewer family to Ireland

Some of the MacCrewer family moved to Ireland, but this topic is not covered in this excerpt.
Another 65 words (5 lines of text) about their life in Ireland is included in all our PDF Extended History products and printed products wherever possible.

Migration of the MacCrewer family

Many who arrived from Scotland settled along the east coast of North America in communities that would go on to become the backbones of the young nations of the United States and Canada. In the American War of Independence, many settlers who remained loyal to England went north to Canada as United Empire Loyalists. Their descendants later began to recover the lost Scottish heritage through events such as the highland games that dot North America in the summer months. Research into various historical records revealed some of first members of the MacCrewer family emigrate to North America: William Brewster who arrived in the " Mayflower" and settled in Plymouth in 1620, where he was the religious leader of the Plymouth Colony. He was from the Essex branch of the family, and one of his descendants was Henry Calvin Brewster of Rochester, New York..