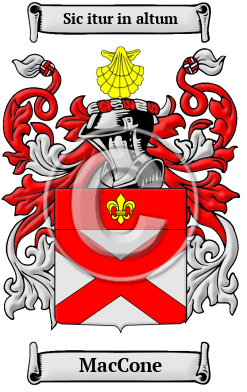 A family of Strathclyde-Briton were the first to use the name MacCone. They lived in the Scottish-English border region. The MacCone family lived in Ayrshire, Dumfriesshire, and other Lowland counties. The name may be from the Scottish word cowan, a dry-stone-diker or more likely a corruption of Colquhoun, the common pronunciation of which is Cohoon. "Mr. Alexander Cowan, father of Sir John Cowan of Beeslack is said to have left on record that many of his grandfather's books bore the name of Colquhoun." [1]

Early Origins of the MacCone family

The surname MacCone was first found in Ayrshire (Gaelic: Siorrachd Inbhir Àir), formerly a county in the southwestern Strathclyde region of Scotland where a name like Iain MacComhain becomes Iain Comhan in Gaelic while the English equivalent is Cowan. The name of James Cowhen, chaplain in North Berwick, 1560. [1]

Early History of the MacCone family

In the era before dictionaries, there were no rules governing the spelling or translation of names or any other words. Consequently, there are an enormous number of spelling variations in Medieval Scottish names. MacCone has appeared as Cowan, Cowans, Cowen, Cowens, MacCowan, MacCowden and many more.

Notable amongst the family at this time was Frederic Hymen Cowen, born Jan. 29, 1852, at Kingston, Jamaica, exhibited early an extraordinary love of music, was brought to England by his parents when four years old, and placed under the tuition of Sir J. Benedict and Sir J. Goss, whose pupil he remained until the winter of 1865. He then studied at the conservatoires of Leipzig and Berlin, returning to London...
Another 70 words (5 lines of text) are included under the topic Early MacCone Notables in all our PDF Extended History products and printed products wherever possible.

Migration of the MacCone family to Ireland

Some of the MacCone family moved to Ireland, but this topic is not covered in this excerpt.
Another 75 words (5 lines of text) about their life in Ireland is included in all our PDF Extended History products and printed products wherever possible.

Migration of the MacCone family

The freedom, opportunity, and land of the North American colonies beckoned. There, Scots found a place where they were generally free from persecution and where they could go on to become important players in the birth of new nations. Some fought in the American War of Independence, while others went north to Canada as United Empire Loyalists. The ancestors of all of these Scottish settlers have been able to recover their lost national heritage in the last century through highland games and Clan societies in North America. Among them: Barbara Cowan who settled in New Jersey in 1685; along with Marjorie; Andrew Cowan settled in South Carolina in 1772; Alexander Cowan settled in New York City in 1774.