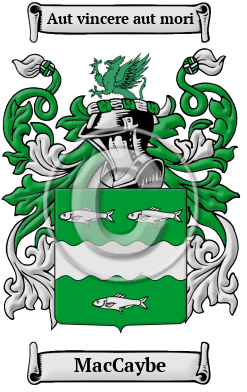 The MacCaybe family's roots in Ireland stretch back to the year 1350, when they were imported to Ireland as mercenaries, or gallowglasses, from Scotland by the Irish chiefs of the O'Rourkes and the O'Reillys of Leitrim and Cavan. This family was named for the peculiar headgear it wore: the name MacCaybe comes from the Gaelic word Caba, meaning 'hat' or 'cap.' Thus, it belongs to the nickname category of surnames.

Early Origins of the MacCaybe family

The surname MacCaybe was first found in on the Isle of Arran in Scotland. Shortly after their arrival in Ireland in 1350, they became a recognized Breffny sept with their chief being "Constable of the two Breffnys". This would be their homeland for centuries. They were known as mercenaries to the O'Reillys and the O'Rourkes, but then became their own Sept in Breffny and their Chief was the 'Constable of the two Breffnys.'

Early History of the MacCaybe family

This web page shows only a small excerpt of our MacCaybe research. Another 112 words (8 lines of text) covering the years 1601, 1613, 1810, 1740 and 1689 are included under the topic Early MacCaybe History in all our PDF Extended History products and printed products wherever possible.

More information is included under the topic Early MacCaybe Notables in all our PDF Extended History products and printed products wherever possible.

Migration of the MacCaybe family