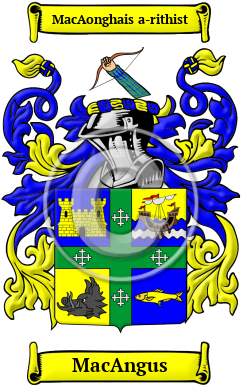 MacAngus is one of the names derived from the families of the ancient Dalriadan clans of Scotland. It is derived from the personal name Angus. The Gaelic form of the name, Mac Aonguis, translates as son of Angus. Angus refers to the Pictish King Onnust who died in the year 761.

While there are no direct links with this King in the history of the Clan or surname, there is a conjectural line, which may be adopted. The lands descended into the Barony of Innes in the County of Elginshire. However, the son or sons of Angus, originally from the Kingdom of Dalriada, were one of the three kindred houses, of the kingdom, the other two houses being the Gabran (the largest) and Lornetach which provided fighting men for the defense of the Kingdom of early Scots. For every twenty homes owned, they were obliged to provide two galleys, and so Angus, having 430 houses, provided a fleet of approximately forty galleys for the defense of the waters of Dalriada, generally those estuaries around the mouth of the Clyde.

Early Origins of the MacAngus family

The surname MacAngus was first found in Morven, their earliest known territory. In 1230, the Clan suffered from King Alexander II's campaign against Argyll. The Clan, however, retained their castle Kinlochaline, which stands upon strategic rock in Morvern. A massive castle by early standards, today it is in ruins.

Early History of the MacAngus family

This web page shows only a small excerpt of our MacAngus research. Another 155 words (11 lines of text) covering the year 1358 is included under the topic Early MacAngus History in all our PDF Extended History products and printed products wherever possible.

Spelling in the medieval era was a highly imprecise process. Translation, particularly from Gaelic to English, was little better. For these reasons, early Scottish names are rife with spelling variations. In various documents MacAngus has been spelled MacInnes, MacInnis, MacAngus and many more.

More information is included under the topic Early MacAngus Notables in all our PDF Extended History products and printed products wherever possible.

Migration of the MacAngus family to Ireland

Some of the MacAngus family moved to Ireland, but this topic is not covered in this excerpt.
Another 71 words (5 lines of text) about their life in Ireland is included in all our PDF Extended History products and printed products wherever possible.

Migration of the MacAngus family

The hardy Scots who made the crossing settled all along the east coast of North America and in the great west that was just then opening up. At the time of the American War of Independence, many United Empire Loyalists moved north from the American colonies to Canada. Scottish national heritage became better known in North America in the 20th century through highland games and other patriotic events. An examination of immigration records and passenger ship lists revealed that people bearing the name MacAngus arrived in North America very early: Duncan McInnes, who settled in Philadelphia in 1798; Thomas and Helen McInnes, who settled in Boston in 1849; John McInnis who settled in South Carolina in 1716.

Historic Events for the MacAngus family +