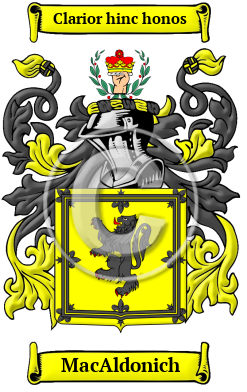 The current generations of the MacAldonich family have inherited a surname that was first used hundreds of years ago by descendants of the ancient Scottish tribe called the Picts. The MacAldonich family lived in the great lands of Buchanan in Stirlingshire where this illustrious Clan held extensive territories since early times. Although many of today's members of the Clan Buchanan can trace their heritage as far back as McAlpin, the first to establish the name of Buchan was Anselan O'Kyan, son of the King of Ulster about 1016.

Early Origins of the MacAldonich family

The surname MacAldonich was first found in Lennox. In Gaelic, "both-chanain" means "the seat of the canon," suggesting an ecclesiastical origin. The Clan received its name from the great lands of Buchanan in Stirlingshire where they had held extensive territories since early times. The earliest mention of the name placed him in Stirling (now part of the modern region of Central) where in an early document, a Dominus Absolone de Buchkan was a witness to a charter in 1224.

Early History of the MacAldonich family

Scribes in the Middle Ages did not have access to a set of spelling rules. They spelled according to sound, the result was a great number of spelling variations. In various documents, MacAldonich has been spelled Buchanan, Bucanan, Bucanion, Bucanen, Bucanon, Buchannan, Buchannon, Buchannen, Buchanon, Buchanen, Bohannon and many more.

Notable amongst the Clan at this time was George Buchanan (1506-1582), Scottish humanist, scholar, and educator; as well as John Buchanan of that Ilk (d. 1681), Clan Chief and last Laird of Buchanan and Buchanan of Arnprior. Andrew Buchanan (1690-1759), of Drumpellier, was Lord Provost of Glasgow, and was descended from a branch of the old family of Buchanan of Buchanan and Leny. He was the second of four sons of George Buchanan, maltster, Glasgow, one of the covenanters who fought at Bothwell Bridge. [2] George Buchanan (1506-1582), was a Scottish scholar, and third son...
Another 92 words (7 lines of text) are included under the topic Early MacAldonich Notables in all our PDF Extended History products and printed products wherever possible.

Migration of the MacAldonich family to Ireland

Some of the MacAldonich family moved to Ireland, but this topic is not covered in this excerpt.
Another 65 words (5 lines of text) about their life in Ireland is included in all our PDF Extended History products and printed products wherever possible.

Migration of the MacAldonich family

The cruelties suffered under the new government forced many to leave their ancient homeland for the freedom of the North American colonies. Those who arrived safely found land, freedom, and opportunity for the taking. These hardy settlers gave their strength and perseverance to the young nations that would become the United States and Canada. Immigration and passenger lists have shown many early immigrants bearing the name MacAldonich: John Buchanan, who settled in Boston Massachusetts in 1651; David Buchanan, who arrived in Boston in 1652; Jane Buchanan, who settled in 1664 in New Jersey, Alexander Buchanan, listed as a Scot banned to America in 1678.