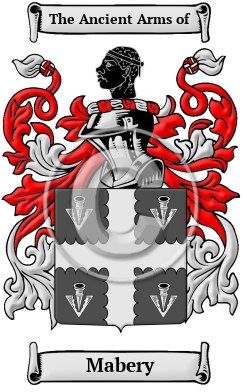 The name Mabery arrived in England after the Norman Conquest of 1066. The Mabery family lived in Cheshire, at the manor of Marbury, from whence they took their name. However, we must look to Normandy to find the first record of the family. It was there that "Nicholas Merbury, Butler of the King, Normandy" [1] was found 1180-1195.

Alternatively, the family could have descended from Marlborough, a borough and market-town, and the head of a union, in the hundred of Selkley in Wiltshire.

"The name, anciently written Marleberg, or Marlbridge, is supposed to be derived from the marl, or chalk, hills by which the town is surrounded. At the time of the Norman survey [(1086]), Marlborough had a church, and was held in royal demesne; soon after, a castle was erected, which seems to have been the cause of the subsequent enlargement of the town. In the time of Richard I., and during his imprisonment in Austria, his brother John took possession of this fortress; but Richard, on his return from captivity, seized it, with all the other possessions belonging to his brother, and on their reconciliation he still retained the castle of Marlborough in his own hands. " [2] In this case, the first on record was Alured de Merleberge who held lands here at the time of the Domesday Book of 1086. [1]

Early Origins of the Mabery family

The surname Mabery was first found in Cheshire at Marbury, a township, in the parish of Great Budworth, union of Northwich, hundred of Bucklow. [2] [3]

The place name dates back to the Domesday Book of 1086 when it was first listed as Merberie and was held by William Malbank, who held them from Earl Harold. [4] Literally, it means "fortified place near a lake," from the Old English words "mere" + "burh." [5]

Early History of the Mabery family

A multitude of spelling variations characterize Norman surnames. Many variations occurred because Old and Middle English lacked any definite spelling rules. The introduction of Norman French to England also had a pronounced effect, as did the court languages of Latin and French. Therefore, one person was often referred to by several different spellings in a single lifetime. The various spellings include Marbury, Marburie, Marberrie, Marberry, Merbury, Marburry, Marburrie, Marbery, Marberie and many more.

In the United States, the name Mabery is the 13,227th most popular surname with an estimated 2,487 people with that name. [6]

Migration of the Mabery family to Ireland

Some of the Mabery family moved to Ireland, but this topic is not covered in this excerpt.
Another 68 words (5 lines of text) about their life in Ireland is included in all our PDF Extended History products and printed products wherever possible.

Migration of the Mabery family

Many English families left England, to avoid the chaos of their homeland and migrated to the many British colonies abroad. Although the conditions on the ships were extremely cramped, and some travelers arrived diseased, starving, and destitute, once in the colonies, many of the families prospered and made valuable contributions to the cultures of what would become the United States and Canada. Research into the origins of individual families in North America has revealed records of the immigration of a number of people bearing the name Mabery or a variant listed above: Gilbert Marburie who settled in Virginia in 1622; Richard Marbury settled in Virginia in 1643.